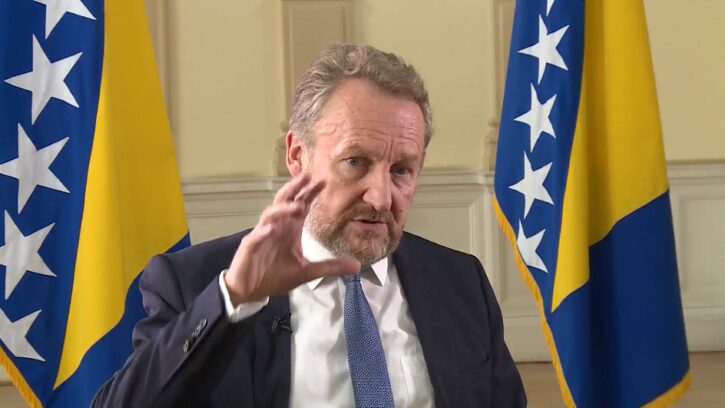 Bosnia’s Presidency Chairman told N1 that the Head of EU Delegation to Bosnia needs to answer many questions as to why the EU ignored Bosnia’s arguments against the beginning of the Peljesac Bridge construction and decided to co-finance the project. He called out the Croat Democratic Union (HDZ BiH) for siding with Croatia at the expense of Bosnia.

“I had a long conversation with Mr. (Lars-Gunnar) Wigemark on this topic, where I stated and presented arguments and asked for an answer from the European Commission, as the European Commission has obviously decided to financially support a project that breaches international law and undermines the rights of Bosnia and Herzegovina to access to the sea in accordance with the UNCLOS (United Nations Convention on the Law of the Sea),” Izetbegovic said. “The meeting was a bit uncomfortable. I asked him to finally give me a precise answer to our requests.”

Izetbegovic mentioned rumours saying that EU Director General for Regional and Urban Policy, Mark Lamaitre, had sent a letter to the Croatian Government, asking it to first resolve the issue with Bosnia before beginning construction.

“Promising developments were taking place which were in the interest of protecting our rights, but then all of that took a turn for the worse, without a single reply to Bosnia and Herzegovina,” he said.

The Presidency member explained that he found out that the funds were approved and that “things are going forward with the construction.”

“We tried once again to stop this with diplomatic means, but we have obviously been unsuccessful so far,” Izetbegovic added.

He stressed that Bosnia’s objections are not aimed against the bridge itself, but are aimed at protecting Bosnia’s rights.

“We are, in fact, not fighting against Croatia building the bridge, let them connect their territory and the EU territory. We are fighting for our right.”

He noted that he asked Wigermark several questions.

“Why have you personally not done everything that was necessary and why did you not give us a definite answer so we would know where we stand? Why are the European Union and you personally behaving this way toward Bosnia?,” Izetbegovic said.

The Presidency member said he suspects Croatia lobbied with a certain individual within the EU, whom he would not name, for the European Commission to decide as it did.

The stance of Bosnia’s Presidency regarding the Peljesac Bridge may be a decade old, but it was never withdrawn, he said.

“We have the conclusion of the House of Representatives in Bosnia’s Parliament which is binding, and we will act accordingly,” he said.

He said he attempted to discuss this issue with other two Presidency members to see whether Dragan Covic, a Presidency member from the Croat people, had changed his opinion, but to no avail.

“Mr. (Mladen) Ivanic (a Serb Presidency member) said we should at least be familiarised with what the UCLOS guarantees to Bosnia, in order to then discuss this issue during the next Presidency session, but Mr Covic was against this. He has directly sided with the Republic of Croatia,” Izetbegovic adds.

When asked whether he knew that Dragan Covic would side with Croatia when he first contemplated entering into a coalition with him at the state end entity level, Izetbegovic said he was well aware of this.

“Of course I knew, but without the HDZ BiH, we would not be able to form the Government. The HDZ BiH has 13 out of 17 Croat seats in the House of Peoples of the Federation of Bosnia and Herzegovina (FBiH) entity. Practically nothing could be adopted without them,” he answered.

Izetbegovic then returned to the topic of Bosnia’s access to the sea, saying he firmly believes Bosnia will have full access to the open sea.

“There are international courts. The problem is, however, “the fifth column” in Bosnia which we are trying defeat. We will fight on for the interests of Bosnia and Herzegovina. This is a marathon chess game and we will win as many rights as we can fight for,” he stressed.

Izetbegovic was also asked to comment on the Draft Law on Electoral Units in the FBiH which is currently in the parliamentary procedure, after the Constitutional Court of Bosnia and Herzegovina ruled, two years ago, that some provisions of the Election Law were inconsistent with the state Constitution. Since then the authorities have failed to act in the legally allowed time-frame resulting in a further court ruling to delete two sections of the Election Law that treat the matter of representation in the FBiH House of Peoples.

Recently, however, four parties – the Democratic Action Party (SDA), the Alliance for Better Future (SBB), the Social Democratic Party (SDP) and the Democratic Front (DF), with support of the Our Party, agreed on a law proposal that defines the geographical constituencies and the number of mandates in the Parliament of the FBiH, Bosnia's entity shared by Bosniaks and Croats, hoping they would solve the current political crisis that hinders the progress of the country.

“We tried to reach an agreement through negotiations with the international community and at one point we had an offer, which was rejected only by the HDZ BiH. In the past, we had the experience where we regularly failed to resolve this issue with the HDZ BiH. This was a moment when Mr Wigemark and (US Ambassador to Bosnia) Mrs. (Maureen) Cormack offered a solution,” he said. “At that time, I stopped to see who would support this solution and every party representative supported it apart from the HDZ BiH, and thus we could not wait any longer.”