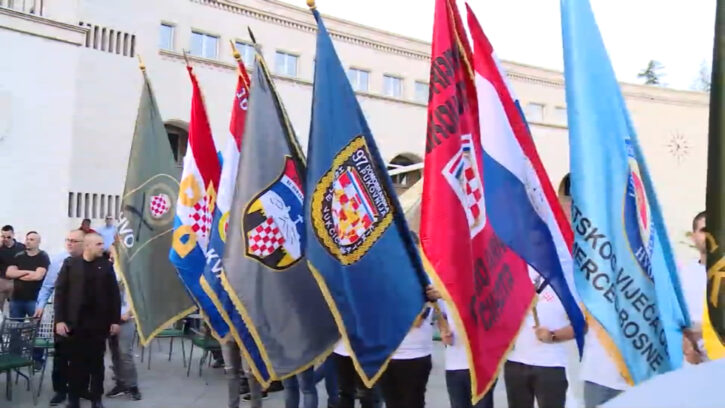 Herzeg-Bosnia had contributed to the integrity of Bosnia and Herzegovina and it was integrated into the country’s fundaments, Croat representative, Bozo Ljubic, said on Tuesday at a ceremony marking the 25th anniversary of this self-declared Bosnian Croat political structure.

“Most of the Croat territories were defended, Croats stayed. It is important to all those who respect Croats as their neighbours and a constituent people. The future of how to make Bosnia and Herzegovina functional lies ahead of us,” Ljubic told the media in the southern town of Grude, where the celebration officially started by laying of wreaths at the Herzeg-Bosnia President Mate Boban’s grave.

Herzeg-Bosnia was first established as a Croat community in the south of Bosnia and Herzegovina in 1991. Its founders were Croat nationalists led by the Croat Democratic Union (HDZ BiH).

Its armed forces, the Croat Defence Council (HVO), were first allied with Bosniak armed forces. But HVO and Bosnia's Army turned against each other after the para-state declared itself a republic on August 28, 1993, and changed its name into the Croatian Republic of Herzeg-Bosna, with Mostar being its capital.

For its advocators, it was an attempt of Bosnian Croats to defend themselves in the 1990s war, while for its critics, it was a move which was supposed to result in the annexation of that part of Bosnia and Herzegovina to neighbouring Croatia.

The Croat-Bosniak conflict ended in 1994 with an agreement brokered in Washington, D.C. which prescribed the creation of a Bosniak-Croat Federation entity (FBiH) out of territories controlled by Bosniaks and Bosnian Croats. Herzeg-Bosnia was abolished two years later.

Herzeg-Bosnia is being “unilaterally demonised”, according to HDZ BiH’s Zeljko Raguz. He said it was a Croat territory just like “Bosniaks had their territory they called Bosnia and Herzegovina and Serbs had their own.”

The International Criminal Tribunal for former Yugoslavia (ICTY) convicted in 2013 six high-ranking officials of Herzeg-Bosnia for war crimes against humanity, violation of the laws or customs of war and grave breaches of the Geneva Conventions committed between 1992 and 1994.

All six were found guilty for their participation in a joint criminal enterprise (JCE) with the objective of “removing the Muslim population from the territories on which the Bosnian Croat leadership, acting in concert with the leadership of Croatia, wanted to establish Croat domination”, according to the ICTY.

Raguz said there was no ground for such sentence.

“We live in the world where people and interests of the great powers make decisions. That’s what they decided and they couldn’t prove it for any of the Hague six,” Raguz added.

A holy mass was held on the occasion of the anniversary at the Mostar cathedral and delegations led wreaths for Croat defenders in that city.

The manifestation was organized by the HNS BiH and the Croat Documentation Centre for the Homeland War in Bosnia and Herzeg-Bosnia.

The event was attended by Croat member of Bosnia’s tripartite Presidency, Dragan Covic, and other Croat representatives in the state institutions.