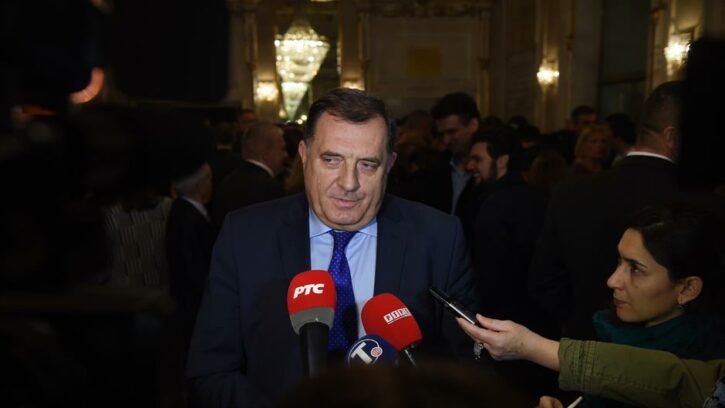 Bosnian Serb hardliner Milorad Dodik announced his first moves as the chairman of Bosnia’s presidency on Wednesday, saying the state police will no longer be able to operate in the Bosnian Serb half of the country and that he will be working for the interests of the Serb entity.

Milorad Dodik has been advocating for the secession of the Serb semi-autonomous entity in Bosnia, Republika Srpska (RS), for more than a decade and claims to be supported by Russia. He won most of the votes from Republika Srpska in the October election and was inaugurated on Tuesday as the Bosnian Serb member of the tripartite state presidency.

Since it was the Bosnian Serb member’s turn, Dodik will be chairing the institution for the next eight months.

He made it very clear that he will be pursuing the interests of neighbouring Serbia in the institution as he views that country as his own and not Bosnia. He said he assumed his new post to represent Republika Srpska.

“They should have gotten used to that,” he said, referring to representatives of the two other ethnic groups in the country, the Bosniaks and the Croats, as well as international officials.

“Serbs think that way, and I don’t want to be a politician who will say things that are not typical and that are deceptive for the Serb people,” he said.

For years Dodik has been opposing any state-level institution. He focused his efforts on emphasising the autonomy of Republika Srpska and has often treated it as a separate country.

Decisions in the Bosnian presidency are reached by consensus and if he is outvoted by the Bosniak and the Croat members, he will reach out to the parliament of Republika Srpska for support.

Dodik explained that according to the Constitution, the parliament of Republika Srpska, the RS National Assembly, has the right to reject decisions made by the state presidency.

“To us, if it comes to any outvoting, the final authority at the state level is not the presidency but the RS National Assembly, and I will not shy away from this,” he said.

He added that he is not a person who would harm anyone but that he is “radical and rigorous when he feels that someone wants to humiliate his people and the republic (RS) he comes from.”

Dodik said his new job is not what he wished for and that he is “personally not especially happy” he is doing it.

“But at the same time I took over the responsibility, as time and political processes have brought me into the position to accept the candidacy and show that Republika Srpska needs to be respected and cannot be ignored,” he said.

Dodik called Bosnia and Herzegovina a “failed experiment,” arguing that the High Representatives, the officials appointed by the international community to oversee the implementation of the 1995 Dayton Peace Agreement which ended the war, “have handed down decisions with which they modelled the political system, derogated the Constitution and breached international law 540 times.”

He said that when the High Representative imposed a law or decision ten years ago, “I, as (RS) Prime Minister, have then barred the publication of this in the (RS) official gazette,” he said.

Dodik said he will move his office from the Presidency in Sarajevo to the Bosnian Serb part of the capital and said he wants to return all competencies the RS had right after the war back to the entity.

“The SIPA (State Investigation and Protection Agency) will not be allowed to enter the RS territory, as the Constitution says that armed forces of one entity or from the state level cannot enter the territory of the other entity without permission by that entity Government,” he said.

SIPA is the state police, the equivalent to the FBI in the United States. The two Bosnian entities, Republika Srpska and the Federation dominated by Bosniaks and Croats have their own police forces, but SIPA has competencies throughout the country.

Dodik aims to end that competency and “should this happen (SIPA entering the RS), of course, we will react, and it will be quick,” he added, explaining that the reactions “will not be meant to cause disorder, but to establish order.”

He did not elaborate on the details of what the reaction would entail.

The new Bosnian Serb Presidency member also made it clear that he does not have a favorable view of the West, particularly of the U.K., referring to the Kingdom’s proposal that the UN Security Council condemns the 1995 Srebrenica genocide – a crime that has been defined as such by two international courts and which most Serb representatives in Bosnia consistently deny.

Russia vetoed the proposal.Dodik said that he cannot forget that Great Britain proposed a resolution that would “place Serbs into the category of nations that committed genocide in the past century.”

“You cannot impose such a narrative on us and have us then be fair to you. The fact that Britain wanted to label us with such a qualification is engraved in me,” he said.