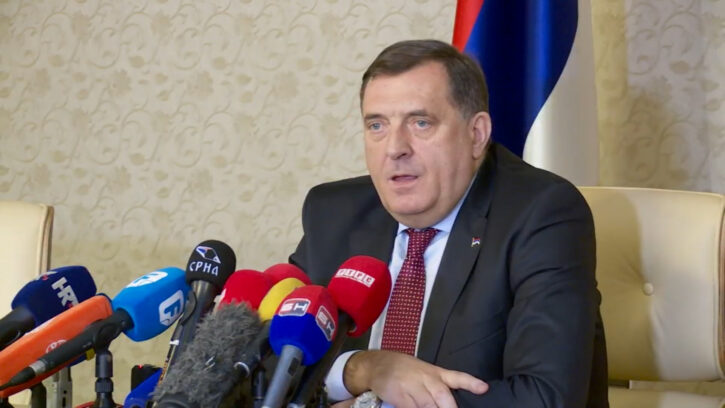 I received Donald Trump’s letter on Bosnia's Statehood Day and said that Bosnia does not have such a holiday, the newly elected Bosnian Serb Presidency Chairman Milorad Dodik said, Friday, commenting on Trump's letter in which he congratulated the tripartite Presidency on the Statehood Day of Bosnia and Herzegovina.

“I received the letter from US President Donald Trump congratulating Bosnia’s Statehood Day, and I responded saying that it’s not my day nor is it celebrated by Serbs,” Dodik said during his press conference. “It’s a matter of speculation, and I was never notified that Bosnia and Herzegovina has its statehood day.”

Dodik added that he also told Trump that they could always talk about Bosnia’s EU integration process but not the NATO integration.

“The decision to become part of NATO was never made. It’s a lie that such a decision exists,” Dodik stressed and added that Serbs do not trust NATO because they were hurt by the NATO bombing.

NATO conducted airstrikes in Bosnia and former Yugoslavia in 1995 and 1999. Airstrikes in Bosnia targeted the Army of the Republika Srpska entity which threatened to attack the UN-designated “safe-zones” in Bosnia during the Bosnian war (1992-1995).

In 1999, NATO forces conducted another round of airstrikes in the region, but this time against the former Yugoslavia, during the Kosovo war. The bombing continued until Yugoslavia withdrew its troops from Kosovo and the United Nations Interim Administration Mission in Kosovo (UNMIK) peacekeeping mission was established.