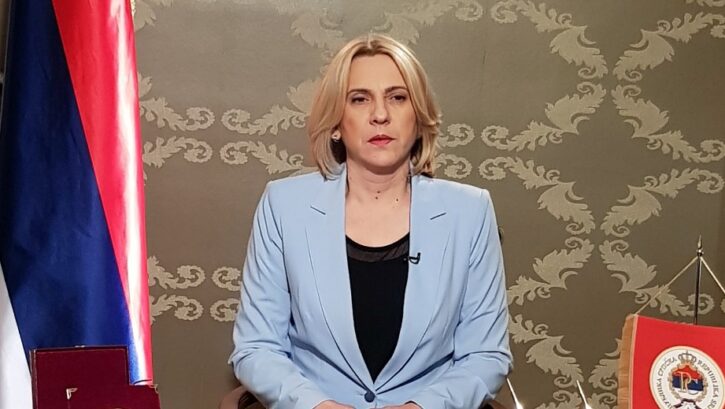 Bosnia is a frozen country, and there is no hope for her, RS Prime Minister Zeljka Cvijanovic said commenting on the Bosnian Croat Presidency member Zeljko Komsic’s condition that the Council of Ministers will not be formed until Annual National Programme for Bosnia is adopted.

“Such conditions are evidence of how shallow his policy is. It is quite clear who the election winners are and who can form the parliamentary majority,” Cvijanovic noted. “This is evidence that Bosnia is a frozen and stiff country and that there is no hope for it. The Council of Ministers Chairman position belongs to the Alliance of Independent Social Democrats (SNSD) and the current convocation of the Council of Ministers has neither authority, not credibility.”

Bosnia’s tripartite Presidency member Zeljko Komsic said adoption of the first Annual National Programme (ANP) for NATO would be his condition to support the appointment of Serb candidate Zoran Tegeltija as the new Council of Ministers Chairman-designate.

The ANP is essential for the activation of the Membership Action Plan (MAP) for NATO, the first step in a country’s bid to join the Alliance.

The MAP, however, is not a guarantee of accession to the alliance, to which politicians from the Serb dominated entity of Republika Srpska object.

According to Cvijanovic, the RS position on Bosnia’s NATO accession is clear, and it was expressed in their resolution on the military neutrality.

She told Komsic he better not think of conditioning Bosnia’s EU integration process with this condition.

According to Bosnia’s laws, Bosnia’s tripartite Presidency consisting of members coming from three major ethnic groups in the country, Bosniaks, Serbs and Croats, should appoint the Chairman-designate within eight days after the State Parliament’s lower house inaugural session, which took place on December 6 last year.

The first in the line to take over the post is Serb candidate, Zoran Tegeltija, nominated by the Serb candidate Milorad Dodik’s Alliance of Independent Social Democrats (SNSD). However, the appointment has been hindered due to political disagreements of the main political stakeholders in the country, foremost in the Presidency.