Bosniak Presidency member: Komsic and I are not blocking anything 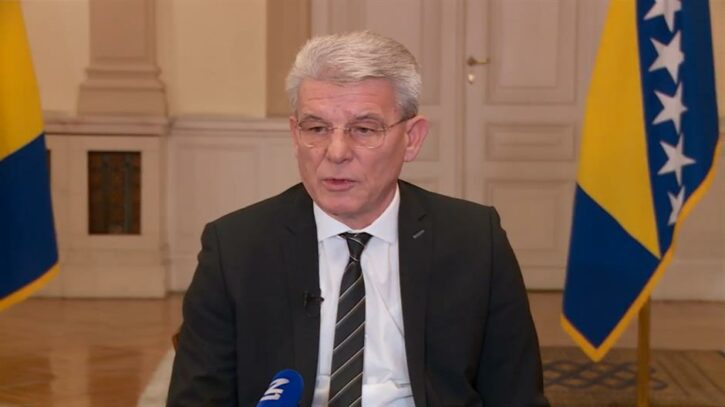 Bosnian Croat Presidency member Zeljko Komsic and I are not conditioning anything, but it was those who are unilaterally abandoning on the solutions adopted earlier through laws and decisions of Bosnia’s Presidency, the Bosniak Presidency member Sefik Dzaferovic said during a press conference on Monday.

“Those who disrespect the law and our foreign policy are the ones setting conditions. It is completely false that Zeljko Komsic and I are conditioning anything,” Dzaferovic said. “It’s clear that the Council of Ministers Chairman should be a Serb candidate, and that the Alliance of Independent Social Democrats (SNSD) should appoint them. But first, a parliamentary majority must be formed with at least 22 votes and the new Chairman must submit their action program, the principles that will include the respect for the laws and established policies in the country.”

According to the law, Bosnia’s tripartite Presidency, consisting of members coming from three constituent peoples in the country, Bosniaks, Serbs and Croats, must appoint the next Chairman after every general election.

After the October general election in the country, the Serb Presidency member, Milorad Dodik, from the nationalist SNSD appointed Zoran Tegeltija to the post, but immediately after Tegeltija said he would not work on Bosnia’s Annual National Programme (ANP) for NATO, a precondition for the Membership Action Plan for Bosnia.

His explanation was that as a Serb candidate, coming from the Serb-dominated Republika Srpska (RS) entity, he must abide by the RS resolution on military neutrality, which stipulates that this semi-autonomous entity would not join any military alliance, and therefore, they would not support Bosnia’s NATO integration process and the MAP activation.

RS Prime Minister Zeljka Cvijanovic (SNSD) said on Monday that Bosnian Croat Presidency member, Zeljko Komsic, who first said Tegeltija’s mandate would not be approved before the Council of Ministers adopts the ANP, should not block Bosnia’s EU accession process with his condition for Bosnia’s NATO accession.

“How can one give the mandate to someone who said in advance that they would not respect the law and that Bosnia would not join the MAP? When we get the parliamentary majority with 22 votes, which will be able to make decisions in line with these principles, then we will vote for the mandate without a problem,” Sefik Dzaferovic noted.

Speaking about the state level majority, he said the best solution would be a majority consisting of his own Democratic Action Party (SDA), Croat Democratic Union (HDZ BiH), the Alliance of Independent Social Democrats (SNSD), the Social Democratic Party (SDP) and the Democratic Front (DF).