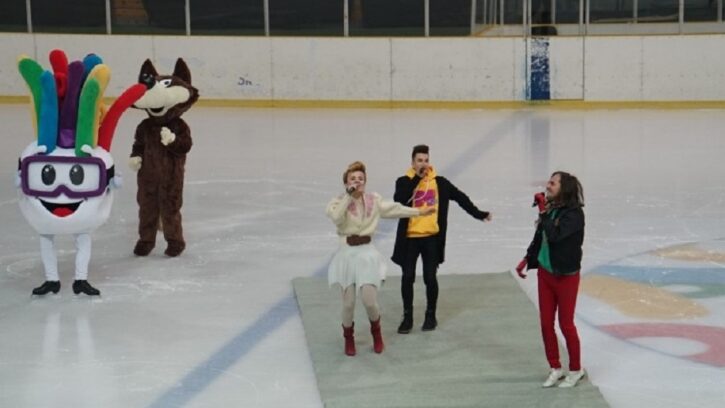 The official anthem of the European Youth Olympic Festival (EYOF) was officially presented in Sarajevo's Zetra Olympic Hall on Wednesday. The ceremony symbolically started with a handover of “the key of success” that the 1984 Olympic Games mascot Vucko passed down to Groodvy, the official mascot of the upcoming EYOF festival.

It is time to take responsibility for the time we live in while keeping the memory of the 1984 Winter Olympic Games, Sarajevo Mayor Abdulah Skaka said at the event.

The cities of Sarajevo and Istocno Sarajevo are organising the youth sports festival together. The competitions in alpine skiing, biathlon, cross-country skiing, figure skating, ice hockey, short track speed skating, curling and snowboarding will take place on Olympic mountains that once hosted the Winter Olympic Games.

“There were quite negative opinions when Sarajevo was entrusted to host the Olympic Games of 1984 but we proved we were capable of organising big events. We want to show again that the city of Sarajevo is prepared, that it can and knows how to organise big events such as the EYOF,” Skaka said.

Senahid Godinjak, the Festival General Manager, congratulated the anthem authors for the job they have done.

“I am happy and proud, I can't hide the emotions that this song has stirred. I believe it will be accepted in the public and that we all will be singing it on the way to Kosevo (Sarajevo neighbourhood where the Zetra hall is situated), and then again in the solemn opening ceremony,” said Godinjak.

The EYOF will officially open on February 9 in a ceremony at the Olympic Zetra hall.