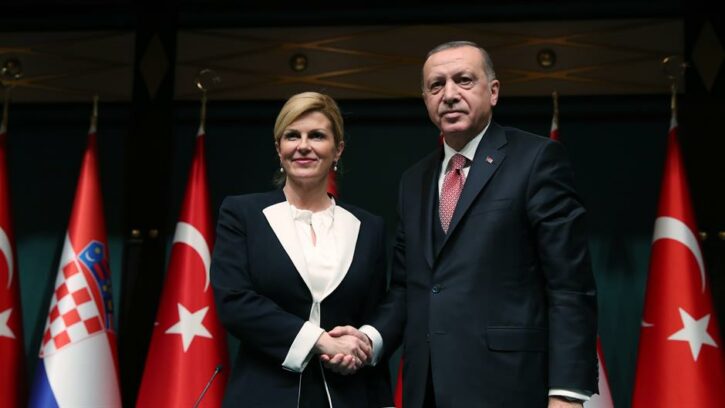 Stability of Bosnia and Herzegovina holds strategic importance and this stability depends on cooperation between its peoples, President of Croatia Kolinda Grabar-Kitarovic said during her official visit to Ankara on Wednesday.

Grabar-Kitarovic departed for the return state visit to Turkey at the invitation of her Turkish counterpart Recep Tayyip Erdogan, and started it by laying a wreath at the tomb of Mustafa Kemal Ataturk, the founder of modern Turkey.

Erdogan paid a state visit to Croatia in April 2016, attending a ceremony marking 100 years since the recognition of Islam's equality with other religions in Croatia. Grabar-Kitarovic paid a working visit to Turkey in January last year.

Only Euro-Atlantic prospect of the South-east European countries is a guarantee for permanent stability and safety, said the President of Croatia.

“I strongly advocate the European perspective for all countries of European south-east as well as the Euro-Atlantic (perspective) for all those countries which emphasised that goal,” said Grabar-Kitarovic.

The agencies carried her as saying that Croatia is Bosnia's biggest friend not only in terms of Euro-Atlantic integration but also in terms of the country's internal reforms.

“I must say here it is necessary to ensure the democratic right to each of three peoples of Bosnia and Herzegovina to elect their legitimate representatives. In that context, we talked about the continuation of trilateral cooperation between Croatia, Turkey, and Bosnia and Herzegovina, and agreed on its importance. It is important to prepare that meeting well on the executive level of authority,” added Grabar-Kitarovic.

Host of the meeting, Recep Tayyip Erdogan, said it would be possible to speak about details of the trilateral meeting once the post-election formation of government in Bosnia is over.

Turkish President pointed out the necessity to revise the Dayton Peace Accords, a peace treaty which ended the 1992-95 Bosnian war and set up a complex power-sharing system in Bosnia.

“It is very clear that the Dayton agreement didn't bring a solution for future of Bosnia and Herzegovina,” he said, adding that the agreement's revision would require the engagement of the UN.