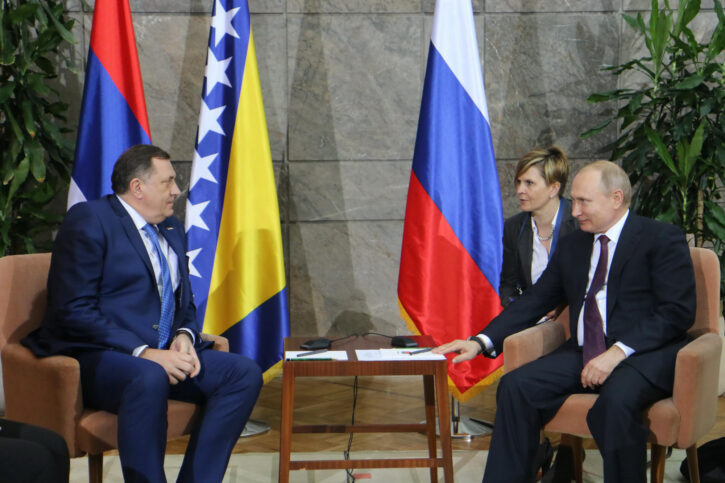 Bosnian Serb leader Milorad Dodik met Thursday with Russia's President in Belgrade and informed him about current developments in Bosnia and Herzegovina. Dodik told Vladimir Putin that the post-election government formation in Bosnia is being conditioned with the country's road to NATO.

Prior to the meeting, Dodik said he was happy to have an opportunity to meet Russia's President, who arrived for a one-day visit to the capital of Serbia. He announced they would among other topics discuss the cooperation of Russia and Republika Srpska, Bosnia's Serb-run entity that Dodik is representing in Bosnia's State tripartite Presidency.

A day before the Presidency Chairman departed for Belgrade, the Presidency member representing Bosniaks and the Federation (FBiH) entity Sefik Dzaferovic said Dodik was travelling in a private capacity.

Bosnia has a tripartite Presidency, consisting of representatives of three major ethnic groups who are also representatives of the country's two semi-autonomous entities. The Bosniak and the Croat members are elected from the Federation (FBiH), while the Serb member is voted in Republika Srpska (RS) entity.

Serb leader Milorad Dodik was elected in the last October election to represent RS and was the first in the line to take the Presidency chairmanship having won the largest number of votes among the three members.

“We achieved a good result, now we're in the stage of government formation at the level of Bosnia and Herzegovina. And of course, there is a certain stalemate. As usual in Bosnia, something is always being conditioned. At this point, the Bosniak side is trying to condition that with accepting the road to NATO which we reject,” Dodik told Putin in a part of the meeting that was open for media.

Apart from the political developments, the two officials also discussed cooperation in the energy sector and a possibility of implementing joint projects.