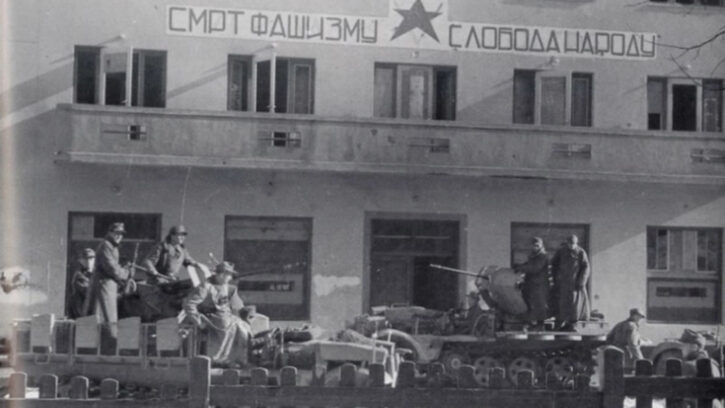 Citizens of the northern Bosnian city of Tuzla gathered on Wednesday to mark the 76th anniversary of the city’s liberation from WWII Nazi collaborators and laid flowers at a monument dedicated to the heroes who made it happen.

Tuzla was the first larger city to be liberated from fascism on October 2, 1943, which was a huge military and political victory for the antifascist National Liberation Army.

Tuzla was an important economic and political centre for the occupying Nazi puppet-regime, the Independent State of Croatia (NDH), as a military-intelligence asset.

Pasan Mehmedovic was among those who were captured by the NDH and taken to their local military commander.

“The commander was so polite that he slapped me and I fell down,” Mehmedovic said ironically.

“When I tried to get up, he started kicking me. He said ‘take this bandit to the cell where he will spend the night.’ Hand him over to the Germans and tell them he was captured as a Partizan,” he remembered.

Although he is 93 years old, Mehmedovic said he would defend Tuzla from fascism again today.

Citizens of Tuzla said they do not feel that fascism is present in their city today, but Tuzla’s former mayor, Selim Beslagic, said that fascism is becoming prominent globally again.

“It seems that we have all gone dormant as we thought that fascism disappeared in 1945. However, as you can see across Europe, there are more and more fascist movements emerging and it’s weird that Europe is not doing anything about it,” he said.

According to a member of the Association of Antifascists and Veterans of the People’s Liberation War in the Tuzla Canton, Zlatko Dulic, it is impossible to eliminate fascism “when the people in power are nationalists who glorify fascists” and “allow for streets to be named after Ustasha (NDH forces) officers.”

“It is important for youth to cherish antifascist values, especially today when we have a trend of migrations and when we need to accept those who are different, and we also have other trends emerging which we need to cherish in order to be on par with other European and world cities and countries,” said Mirnes Cerimovic, from the local ‘Revolt’ youth association.