Bosnian best racer after winning Silver: I am back to the top where I belong 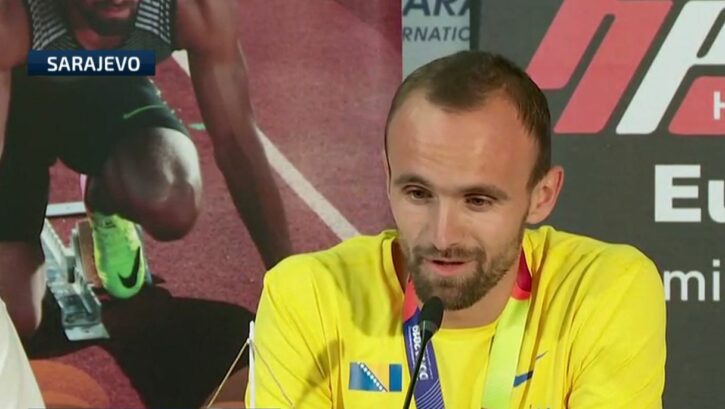 One of the bets athletes Bosnia ever had, world championship medal winner Amel Tuka, arrived in Sarajevo on Friday, a few days after he won Silver at the 800-metre race at the World Athletics Championship in Doha. “I am back to the top where I belong,” Tuka told the reporters upon arrival at the Sarajevo International Airport

After Bronze at the World Championship in Beijing in 2015, Tuka came in the second in the 800-metre race on Tuesday and progressed to the silver medal, finishing the race in 1:43:37.

“I'm aware that I made a huge thing, something much bigger than in Beijing and, thank God, the medal shines brighter this time,” the racer told the reporters who welcomed him at the airport alongside many fans.

“Back in 2015, I had to win a medal. I was the fastest man in the world that year and you expected a medal. I was under pressure but everything went fine. This time it was a bit different. I was good but nobody took me as a serious candidate (for a medal) so I felt no pressure,” said Tuka adding that he felt more confident this time.

Extreme weather conditions in Doha affected the 28-year-old athlete and on the day of the semi-finals, he felt so weak that he even thought about giving up. “I had a fever,” he said.

After medical treatment, Tuka was feeling better during the day and eventually felt completely ready for the race. The same as for the finals, a few days later.

“I was ready to go for all or nothing,” said Tuka. “I won that fantastic second place and the silver medal, which is the greatest achievement of Bosnia's sports, Bosnia's athletics, and I am so proud of that and couldn't wait to be back in Bosnia and Herzegovina to share that feeling with family and all my fellow citizens,” said the athlete.

Amel Tuka arrived in the company of his support team, coach Gianni Ghidini, his nutritionist and psychologist.

“Amel established himself as a person and an athlete with his previous coaches. Now he is only progressing more and more,” said Gianni who has been working with Tuka since 2013.

“If he had had this experience in 2015, he would have certainly won the gold in Beijing,” he added.

Despite the health issues and injuries that Amel experienced in the period after 2015, he never stopped training hard, according to his coach.

Now, the next goal is the gold, said the Italian.