Dodik: Nobody can make Republika Srpska change its mind on NATO membership 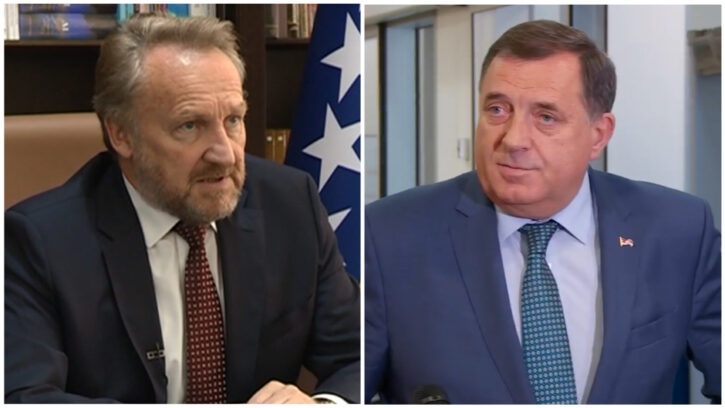 The statement is the latest in the back-and-forth between the leader of the main Bosniak party in the country, Bakir Izetbegovic, and his Serb counterpart Dodik over Bosnia’s NATO membership path and the deadlock over forming the government.

Bosnia’s new government – officially called the Council of Ministers – has still not been formed, more than a year since the election. The reason is a disagreement over whether Bosnia should send the Annual National Programme (ANP) to NATO, which would be the next step toward the country’s membership in the alliance.

Although Dodik’s Party of Independent Social Democrats (SNSD) agreed to the country taking over obligations toward NATO years ago, including sending the ANP, the party has since changed its mind.

In line with neighbouring Serbia, the semi-autonomous entity of Republika Srpska adopted a Declaration on Military Neutrality in 2017. It means the entity does not want to be a member of any military alliances, including NATO.

But for the Council of Ministers to be named, all three members of Bosnia’s Presidency must approve the naming of the ministers, and the next Chairman is supposed to come from Dodik’s party.

The Bosniak and Croat Presidency members refuse to greenlight the SNSD’s candidate until the ANP is sent to NATO in Brussels.

Dodik has accused Izetbegovic’s Party for Democratic Action (SDA) of using the ANP as a condition for forming the government and implementing the will of the voters.

But Izetbegovic sees it differently.

“Previously adopted laws and decisions must be respected,” he said earlier on Friday, arguing that ignoring the 2009 decision which obligates the country to send to document is illegal.

The Bosniak leader said that what his party wants is not a condition but only a request for the rule of law to be respected.

The document must be sent, but if Serbs do not want to join NATO, then the country will not join the alliance, he stressed.

Dodik, however, feels that Izetbegovic wants to bring him down and “change the situation in the RS” in order to send the ANP.

“Then in six months NATO membership can come, that is why we don’t want to make the first step,” he said.