Dodik: We're in power now and we'll throw out the judges 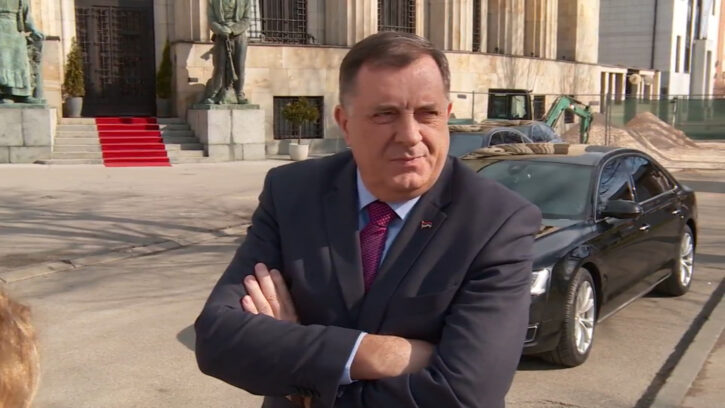 Now that we're part of the government we'll throw out the foreign judges from Bosnia's Constitutional Court and nothing will be done until we throw them out, Bosnia's Serb Presidency member Milorad Dodik said after a Thursday meeting in East Sarajevo with the leader of Bosnian Croats and the Croat Democratic Union (HDZ BiH) Dragan Covic.

“I familiarised our friends with the leadership's decision to cease the decision-making process in Bosnia's institutions which means the institutions won't be able to decide on anything as long as we sort things out,” Dodik said.

According to him, it is the international community's fault that Bosnia is in “this hopeless situation.”

“Everything the international factor did was aimed at weakening the notion of constituent people and at making some kind of civic Bosnia. The constituency concept is a democratic concept. All the solutions that were imposed by the foreigners led Bosnia to this hopeless situation,” the Serb leader noted.

On Wednesday, the authorities of the Serb-dominated Republika Srpska (RS) entity announced they would not take part in the decision-making process at the state level. The reason for this was the Court's decision regarding the appeal of several Bosniak MPs in the RS who appealed against the RS Law on Agricultural Land and the RS Law on Inland Navigation, stating that the RS is usurping state competencies and taking the land which belongs to the state.

The Court ruled in favour of the Bosniak MPs’ motion, declaring several articles from those laws unconstitutional.

Following the signing of the Dayton Peace Agreement which ended the 1992-1995 war in Bosnia, the country was subdivided into two semi-autonomous entities – the Bosniak-Croat shared Federation and the Serb-dominated Republika Srpska. Each entity has its own competencies and parliaments and each entity makes its own laws which must be in line with the state Constitution.

The RS authorities’ demand is for the foreign judges which are now an integral part of the Court to be excluded from it, only leaving the local judges, only then will they start participating in the government's decision-making process.

Bosniak leaders are against this proposal because they believe that judges will not be impartial when dealing with cases threatening the vital national interests of constituent peoples.

Dodik expressed his belief that the region will remain peaceful but that political solutions must be given a chance, as opposed to foreign interventions. According to him, the international community will have to answer why they favoured the Bosniak concept of a centralised state.

Dodik's final message was that Bosnia must on the path it will take and that the SNSD and HDZ BiHI are ready for dialogue, but only if the current practice is set aside.