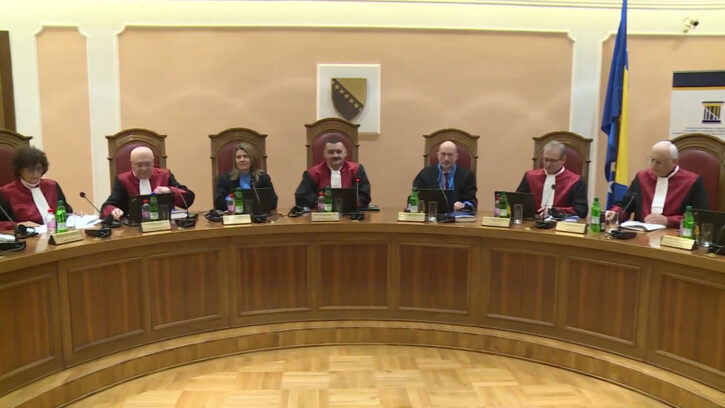 Although the government of Bosnia’s Serb-majority region can ask for the Constitutional Court judges that were elected from there to stop participating in the work of the court, it can not coerce them into it, former judges in the court told N1 on Thursday.

The National Assembly of Republika Srpska (RS), the semi-autonomous Serb-majority region in Bosnia, will on Monday hold an extraordinary session where MPs will discuss whether to request from Constitutional Court judges who were elected from the RS to stop participating in the work of the institution.

The move would be part of the process of blocking state-level institutions which RS leadership announced on Wednesday.

The Constitutional Court in Bosnia is composed of nine judges. Four are elected from the Federation (FBiH), the half of the country mostly shared between Bosniaks and Croats, two are elected from Republika Srpska, and three are foreigners, named by the European Court of Human Rights.

RS President Zeljka Cvijanovic said that all RS representatives would stop participating in the work of state institutions until a law which would remove the three foreign judges form the Constitutional Court is passed.

This came after the Court declared that an RS law, which defined agricultural land located in the region as the ownership of the entity, unconstitutional.

Bosnian Serb leadership, most of all current member of the tripartite Presidency and leader of the strongest Serb party in the country, Milorad Dodik, has been arguing for years that foreign judges in the Constitutional Court tend to agree with the Bosniaks too often and that the institution works against Bosnian Serb interests.

“According to the Bosnian Constitution, a judge’s mandate stops only then he meets the criteria for retiring or if he is for some reason removed, but that is something the Constitutional Court decides on,” former judge Krstan Simic said.

The three judges RS leadership wants to leave are Tudor Pantiru from Moldova, who was also Moldova’s Permanent Representative to the United Nations, Margarita Tsatsa – Nikolovska, a former representative of the Macedonian Judges Association at the European and International Association of Judges, and Giovanni Grasso, former director and coordinator of investigating projects in the field of criminal law and European criminal law.

In a recent interview for N1, the head of the Constitutional Court, Zlatko Knezevic, denied that the institution often hands out ruling based on political interests.

“We could think differently, we could discuss things differently and in the end, we could vote differently. But that does not mean that the Constitutional Court is taking any sides. In the end, five of us must agree on something,” he said.

“The six domestic judges make 99,5 percent of the decisions,” he stressed.

Foreign judges in the Constitutional Court are defined in the Dayton Peace Agreement and only Bosnia’s Parliament can vote to change that.

“For appointments made more than five years after the initial appointment of judges, the Parliamentary Assembly may provide by law for a different method of selection of the three judges selected by the President of the European Court of Human Rights,” the Constitution says.

Former Constitutional Court judge Kasim Trnka explained that the three foreign judges were introduced to ensure neutrality within the institution.

“In the Dayton Agreement, they envisioned the judges as a neutral component in cases of national conflicts within Bosnia and Herzegovina, and it must be said that they played a significant role in that direction,” Trnka said.

The decisions by the Constitutional Court are final and binding. Those who do not implement them face a prison sentence up to five years long.

However, nobody was ever punished for it, including for decisions that were not implemented in FBiH.

The latest decision, according to which the RS can not be the owner of agricultural land, goes in line with a 2012 Constitutional Court decision which said that Bosnia and Herzegovina is the owner of state property.

Simic, however, thought that this ruling was problematic as well.

“For me, it was questionable based on what the Constitutional Court had made the decision since Bosnia’s Constitution doesn’t mention Bosnia and Herzegovina anywhere as owning any land or any rules on property issues,” he said.

He called the ruling an attempt to “fix the legal void which was not defined in the Constitution,” but added that the Constitutional Court does not have such a competency.

Kasim Trnka, however, sees it a lot differently.

“The Constitutional Court gave a precise explanation which said that, when the Dayton Agreement uses the term ‘state’, it only refers to institutions of Bosnia and Herzegovina. The logical conclusion from this is that the property can only belong to the state, as the state is the only owner of state property according to the Constitution,” he said.

Trnka also stressed that an Agreement on Succession Issues for the property of former Yugoslavia also says that the property should belong to the state where it is located now.