Judge Carmel Agius: It is up to local communities to stop genocide denial 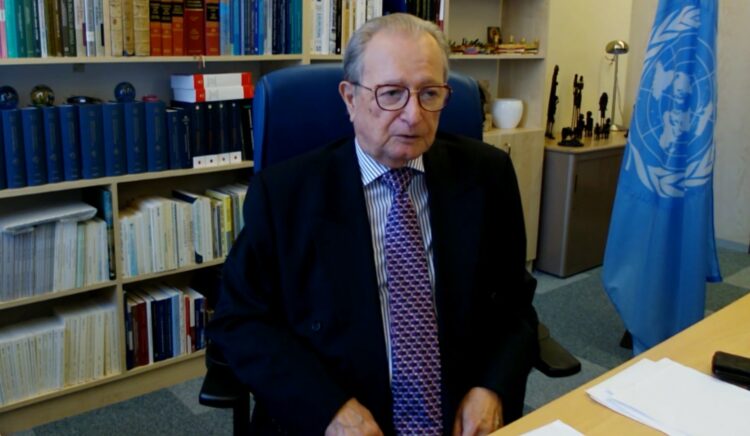 Efforts to revise the 1995 Srebrenica Genocide have increased recently and there is not much international courts can do about it as it is up to the local communities and the goodwill of the people to stop it, Judge Carmel Agius, the President of the International Residual Mechanism for Criminal Tribunals (IRMCT), told N1 on Thursday.

Agius served as the President of the International Criminal Tribunal for the former Yugoslavia (ICTY) until the institution was closed in 2017 and presided over numerous war crimes cases at the court. The IRMCT is the international court tasked with finishing the job of the ICTY.

Agius said that revisionism is “not an unknown phenomenon.”

As for Bosnia in particular, he said he thinks that it happened “because there was a vested interest in certain individuals and a certain section of the population maybe, and also some politicians, to take this position because it was easiest and most convenient for them”.

This, he said, was done in order to “not further expose them to any accountability while pointing fingers towards the other ethnicities in BiH as if they had been responsible for what happened.”

“I am not surprised. Does it worry me that there is this denial and an attempt at revisionism? Of course it does. It bothers me in the first place because I, as an ex-judge of the ICTY, ex-president of the ICTY and now the head of the Mechanism, am therefore responsible for its work and also the legacy of the ICTY. I have a responsibility to defend the work and findings and judgements of the ICTY and the Mechanism. And I will continue to do so, even beyond the end of revisionism,” he explained.

“It is of my concern because I believe that reconciling with the past, accepting the truth that has been established by historians, by judges in the ICTY and the International Court of Justice and also in the domestic courts of Bosnia, plus other countries, where they had to deal with events that took place during the conflict, makes it incumbent on us to make sure that the truth is respected.”

The IRMCT President noted that this campaign of revisionism has been increased leading up to the 25th Srebrenica Genocide anniversary and that this has been done “intentionally.”

“These people that are engaging in this denial know perfectly well what the consequences are. This denial perpetrates and increases the pain and suffering of the victims and the families,” he said.

But although he condemned the phenomenon, he explained that there is no legal court requirement for anybody to recognise that a genocide has been committed. There is not much he or the institution he is the head of can do about it, he said.

“Obviously, I can not do anything as I represent the Mechanism and the Mechanism itself has limited jurisdiction and cannot enter into these matters,” he explained.

“But of course I can speak out. I am against all denialism and revisions in regards to not only the genocide that was committed in Srebrenica in July 1995 but all the other crimes.”

He said denial and revisionism are, for him, like “trying to commit a genocide again.”

“The wounds of the Srebrenica 1995 genocide haven’t healed, they are still bleeding. And what the deniers and the revisionists are doing is that they are stabbing these victims once again, in the same wounds that have still not healed,” he said.

But this, according to Agius, is “the responsibility of the communities in Bosnia and Herzegovina, the politicians, but also the people and, particularly, the younger generation.”

“The younger generations have the right to not be indoctrinated but to know and discover for themselves the truth. The truth is there, we have provided it. The archives of the ICTY and the Mechanism are readily available online for anyone who wants to do research and try and establish the truth,” he said, adding, “I think the future of BiH lies in the goodwill of the people.”

He also stressed that other crimes committed in Bosnia must be recognised as well but that “that is not up to the Mechanism, that is up to your communities.”

“There is nothing stopping you from commemorating all the victims of the wars in the Balkans,” he said.

“This is the reality. I can not get involved in local politics, firstly I’m not competent to do that and secondly, I’m not allowed to do that, but there is much to say,” he added.

Agius said the upcoming 25th Srebrenica Genocide anniversary should also be a reminder for Bosnians and the rest of the world that genocide alone is not the only thing that should be remembered.

“That was the peak, the apex of evil in the events during the conflict. But there were many other victims and many other crimes committed in different parts of ex-Yugoslavia, by different people of different ethnicities and the commemoration should allow and give an opportunity to everyone to remember and pay homage to those victims as well,” he argued.

Agius also spoke about the victims.

“If there is something hurting me at the moment, and I say it with an open heart, it’s my knowledge that after 25 years the victims of the Srebrenica genocide and the families are still in pain. God knows what pain they have been through these 25 years,” he said.

“I know what it means when you lose someone you love and care for. When you lose a parent, when you lose a child. Can you imagine the pain these people have been going through these 25 years? 25 years during which they have been asking for justice.”

He also said he met with the families of the victims and that he knows they are thankful for the work of the work the ICTY has done in ruling that a genocide was committed and bringing those responsible for it to justice.

“But they continue to suffer. And what makes it even worse is that there are even persons around – not many, not the majority, but they exist – and the only thing that they can think of is to continue to hurt these victims and their families by denying what has been established as a fact.”

Agius had a message for Bosnians ahead of the commemoration.

“Don’t let this special event, the 25th anniversary, go by without learning the necessary lessons. 25 years is a long long time, during which a lot has happened. 25 years during which your suffering has continued, your quest for justice has continued, and has not yet been fully satisfied.”

“Let’s hope, all those who are listening to me, that every effort will be made in Bosnia and Herzegovina to bring to justice those – and there are many of them – who are responsible for what happened during that week in Srebrenica in July 1995, but also all the other crimes that happened during the war.”

He also had a message for “everyone who is entrusted with bringing to justice war criminals.”

Agius urged the top authorities of the governments in the region to “expand, extend and increase the level of cooperation” among them “to make it possible for war criminals to be brought to justice and undergo a fair trial.”