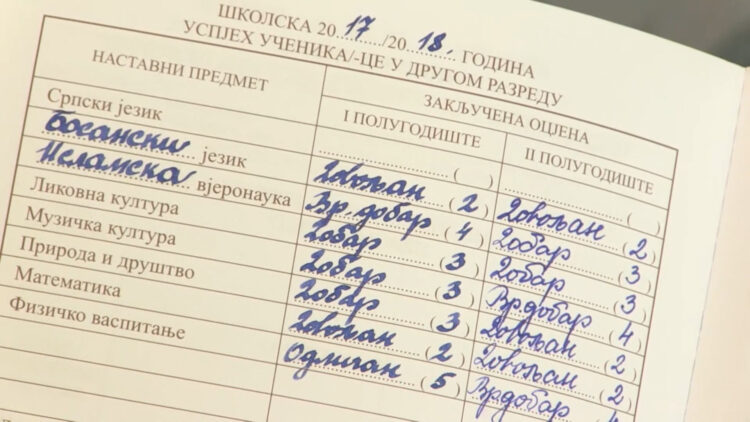 Bosniaks students of the ‘Sveti Sava’ primary school in Liplje, near the eastern town of Zvornik, did not join their classmates on the first day of the new school year on Tuesday since, according to their parents, they are being discriminated against as the principal changed the name of their language from ‘Bosnian’ to “Language of the Bosniak people” in the registry.

Bosnian Serb authorities keep claiming that there is no Bosnian language. Bosniak children, they claim, speak ‘the language of the Bosniak people.’

This is why parents of 12 students are seeking “equality for their children”, and for years they have been calling on the competent institutions to finally solve the problem of the Bosnian language in schools in the semi-autonomous Republika Srpska (RS) entity.

The children are disappointed because they have been looking forward to going to school.

“Well, I was preparing, I was buying everything. My mother was buying, and I was drawing. I bought watercolours, pencils, a pencil case … everything” said Zumra Omerovic.

“Sadly, I was really looking forward to finally going to school after this long break,” adds Lejla Kostjerevac.

Neither Zumra nor Lejla started classes today because of the language problem. In the student's book from the last school year, their language is called Bosnian, but in the registry book, the parents claim it says “Language of the Bosniak people.”

“During the summer break, the principal arbitrarily made corrections in the registry books. As soon as we found out, we organized a meeting with the mayor who called him on the phone,” said Muharem Sinanovic, a parent.

The mayor, he said, asked the principal if he had a written document to support his act but the principal claimed that the ministry issued him a verbal order to do what he did.

“We suspended classes this morning and are waiting for further development,” Sinanovic said.

The Bosniak parents in Liplje remind that the official languages ​​in Bosnia and Herzegovina are Bosnian, Croatian and Serbian, but also that Bosniak children have the right to a national group of subjects. They also have the right to study national subjects.

Parents say that Zvornik city officials, as well as school representatives, were supposed to speak to them on Tuesday morning but that they never came.