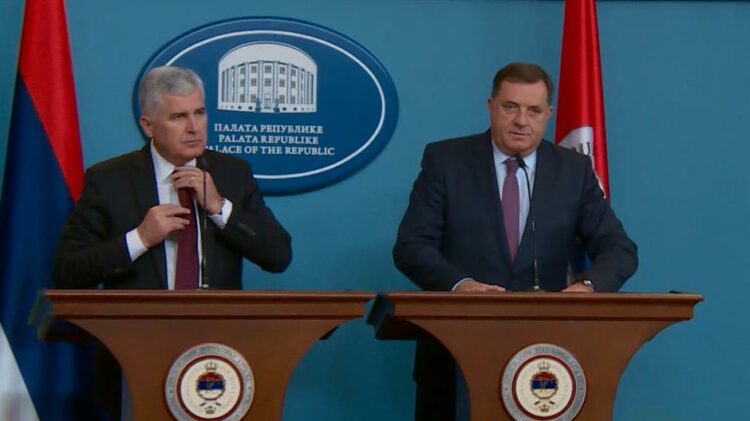 “We insist on a constituent framework for the three constituent peoples, which does not mean a third entity but the protection of constitutional rights,” stressed Covic, adding that changes to Bosnia's electoral legislation to solve the matter of the distribution of power are crucial.

Covic is taking part in the meeting at an invitation of the Russian ambassador to UN, alongside Serb leader Milorad Dodik and High Representative Valentin Inzko. Bosniak political leader, Bakir Izetbegovic, turned down the invitation arguing that Bosnia's state institutions are being ignored.

The meeting was initiated on the occasion of the 25th anniversary of the Dayton Peace Agreement which ended the Bosnian war (1992-1995) and contains the country's Constitution.

“Election Law reform is necessary to have the 2022 elections held in a regular way, and this will be worked on in the next six months,” Covic was quoted as saying.

Milorad Dodik accused both Inzko and previous High Representatives, who were appointed to oversee the civilian implementation of the Dayton Agreement, of “interpreting Dayton without permission.”

The High Representatives were supposed to “monitor and preserve the Dayton and not impose decisions,” Dodik stressed, adding that current international administrator, Valentin Inzko, was speaking on behalf of one constituent people only – “the Bosniak Muslims,” instead of all citizens.

He compared the status of Bosnia's Serb-dominated region, Republika Srpska, with the one of Kosovo, wondering how come the Albanians were allowed to have a state of their own.

“Why the Serbs were not allowed the same? We were punished and now Inzko is trying to further punish us. Inzko has no support at the local level and Covic explained it in a decent manner,” Dodik underscored.

He reiterated that every decision Inzko might impose will be dismissed.

“He breached all the rules a long time ago,” he added.

“One day, we will find a way to defend our rights from Inzko's violations of the international law, but it is necessary to preserve peace and I advocate the Bosnia and Herzegovina that was established in Dayton. I object Inzko and I want everything to be agreed on by constituent peoples,” Dodik concluded.

The High Representative, who regularly reports to the UN on the peace agreement implementation, said this was not one such report but that he wanted to point at the political problems in Bosnia and Herzegovina.

“Centrifugal political forces pose the main political problem, blocking the processes at the state level and blocking the country in that way,” Inzko was quoted as saying.

He also recalled that the authorities at the level of Bosniak-Croat shared Federation entity have not been appointed two years after the election, while the appointment of judges in the Federation's Supreme Court is being blocked.