RS opposition MP: They keep charging me so I would eventually lose my immunity 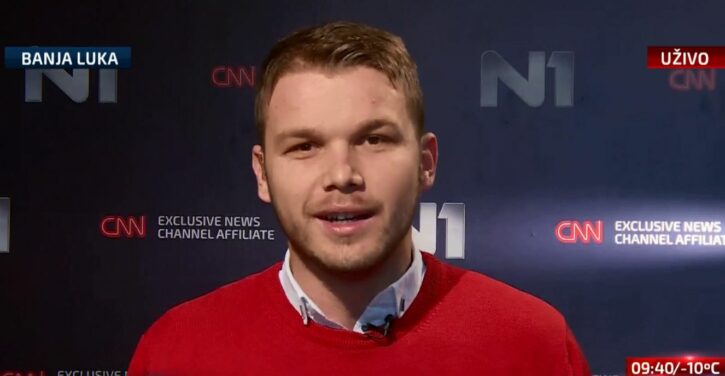 By detaining him three times within a month for taking part in protests and accusing him of trying to organise a coup, the government of Bosnia’s Serb majority region is trying to remove him from the Republika Srpska parliament, opposition MP Drasko Stanivukovic told N1 on Saturday.

Stanivukovic, an MP from the Party of Democratic Progress (PDP) in the National Assembly of Republika Srpska (RS), the Serb-dominated semi-autonomous entity within the country, was detained during protests of the Justice for David group and accused of disturbing public order.

He was released each time but the total of 50 hours in prison made him realise what the real purpose of his three detentions was, he said.

“Their steps are simple,” he said, referring to the current RS government run by the Alliance of Independent Democrats, a party ran by years-long Bosnian Serb leader Milorad Dodik.

He explained that police is mounting charges against him in order to have his MP immunity stripped.

“I got two (criminal charges) in five days,” he said. “That’s a prison sentence from one year to three years. Anything above a year means stripping of immunity and taking the mandate away.”

“It’s pretty clear where this is going,” Stanivukovic said.

The SNSD claims that the ‘Justice for David’ group, which has for months been gathering at the central Krajina Square in Banja Luka, was hijacked by opposition politicians such as Stanivukovic for political purposes.

The ‘Justice for David’ protests began in March when the body of 21-year-old David Dragicevic was found in a local river in Banja Luka, which is the administrative centre of the RS.

Police said initially that the young man had drowned and taken drugs, which sparked outrage. The case was later reclassified into murder.

David’s father, Davor Dragicevic, believes the RS Interior Ministry, led by Minister Dragan Lukac who is a member of the SNSD, is hiding the perpetrators who he believes have political connections.

Footage of the police operation spread throughout the region and drew criticism from domestic and international organisations over the use of force.

“The detention has strengthened me,” Stanivukovic said, adding that it had also given him the opportunity to see how far the government was ready to go.

“As a young man and as a child I have read about show trials,” he said. “But when you experience it yourself, when everything is already prepared, when the same people prosecuting you are judging you, such an amount of injustice, when you spend first 24, then 30 and then 12 hours in a cell where the conditions are unfitting for people, you leave as a different person.”

“It made me stronger, I am more prepared for a new battle,” he said.

While in detention, his motivation to continue fighting only grew, he said.

“Now I have more energy and I can hardly wait for every new day so we fight even more and better. What can happen to me? I am a free man. I don’t listen to them, they do things in their own way and I do things in my own way, one day we will win,” he added.

The leader of the Justice for David group, Davor Dragicevic, remains missing since December 30. His supporters sent him a public message, saying they are waiting for him and they will never abandon him.

The public speculated about Dragicevic’s whereabouts. The theories ranged from police having kidnapped him to him hiding in the British embassy in Sarajevo.

“Davor Dragicevic, wherever you are, you are missed. We love you and you must know that we are praying for you. You will never be alone. Never,” was one of the messages the Justice for David group addressed to the missing father.

Davor Dragicevic was last seen around 11 pm near the Ferhadija Mosque in Banja Luka, while police were chasing protesters away from Krajina Square.