Protest organisers to Vucic: You have turned Serbia into a country of violence 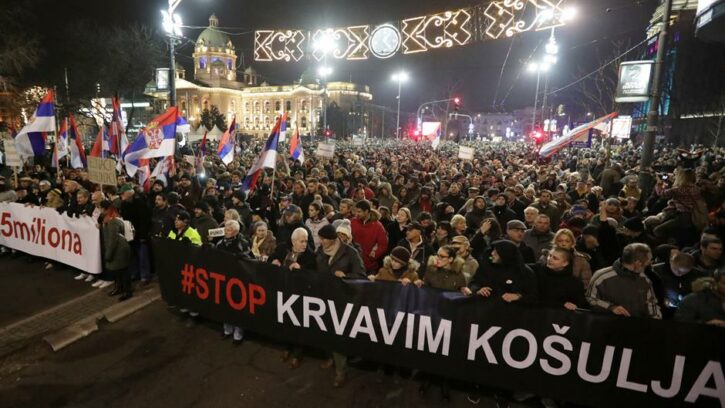 Organisers of the ongoing protests against the rule of Serbia’s President and his party sent an open letter to Aleksandar Vucic accusing him of turning Serbia into a country of violence, hatred and public slandering.

“Your mandate is to be the president of all citizens, not to fight against everybody who dares to think,” the letter sent on Sunday said.

“What you want are vassals and not citizens. That is why you have crowds of people today who do not want to live in the society you are creating,” it said.

The protests that drew tens of thousands to the streets started four weeks ago and were sparked by an attack on opposition leader Borko Stefanovic, who was heavily beaten up by thugs with metal bars ahead of the Alliance for Serbia (SzS) opposition group rally in the central town of Krusevac in November.

The SzS blamed the violence on the “dirtiest witch-hunt which Vucic’s regime wages daily against political opponents”.

The next day, the first protest was held in Belgrade under the ‘Stop bloody shirts’ slogan.

Stefanovic’s attackers were quickly arrested and then released before the 30-day detention expired.

Later, the SzS leaders said the Alliance would boycott elections until conditions for a fair vote are met.

In their open letter, the organisers said they were not afraid of Vucic's his campaign against them and pledged to continue their protests “even if the worst lies are published against the organisers every day,” adding that the protests were not caused by the organisers but represent “a reaction to Vucic’s rule, daily violence and lies.”

“It’s time for you to realise that you can’t scare five million citizens, and therefore also not even one of us. The truth is on our side, everything else is on yours,” it said.

The organisers claim they were writing to Vucic because he is “the editor of almost all media in Serbia.”

“We are writing to you in order to leave a public trace of Serbia being a country of violence, hatred and public slandering during your governance,” they wrote.

The letter accused Vucic of turning everybody who expresses their opinion into an enemy and “drowning them in the tabloid mud.”

“A new enemy emerges every day,” the letter said, “and today you are targeting us. Today we are the ‘drug addicts, foreign mercenaries and traitors’.”

For the fifth time in a row, thousands filled Belgrade’s streets on Saturday evening, protesting against what they said was Vucic’s rising autocratic rule, the lack of freedom of expression and the regime’s control over most of the media in Serbia.

The crowd demanded the resignation of the head of the state television RTS Dragan Bujosevic, claiming he was abusing his office.