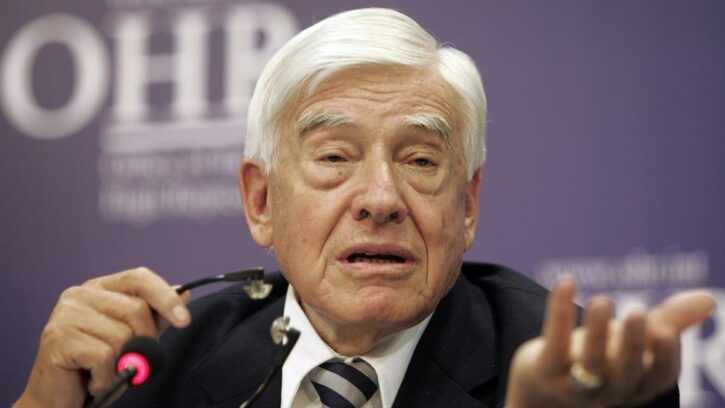 Two events have throughout this March reminded Europeans of the atrocities of the 20th century - the ruling against war criminal Radovan Karadzic and a gathering of Serb ultra-nationalists, Chetniks, in the eastern town of Visegrad, Bosnia, a former international administrator of the country wrote in an article for Deutsche Welle.

Christian Schwarz-Schilling condemned the denial by some officials that a genocide was committed in Srebrenica in 1995.

Bosnian Serb wartime leader Karadzic was sentenced to life in prison for war crimes, including the Srebrenica genocide.

“Any other punishment for a crime this severe can hardly be imagined, it was the planned killing of thousands of innocent people,” the German diplomat wrote, adding that it is “astonishing” that some Bosnian politicians are still denying the war crimes and breaches of human rights which took place in Bosnia and which are “among the worst crimes in Europe after WWII.”

Schwarz-Schilling was the High Representative in Bosnia between 2006 and 2007, the foreign diplomat whom the international community tasked with overseeing the implementation of the 1995 Dayton Peace Agreement which ended the Bosnian war.

In his article, Schwarz-Schilling wrote about the current Chairman of Bosnia’s tripartite Presidency, hardline Bosnian Serb leader Milorad Dodik, who maintains that no genocide took place in Bosnia, despite the rulings of two international courts that say it did.

But Schwarz-Schilling reminded of a statement Dodik made in 2008 when he said it was genocide what happened in Srebrenica.

“With his lies today, Dodik is putting a grave fault on himself,” he wrote, comparing the situation in Bosnia to the one in Germany following WWII.

The perpetrators of the Holocaust were either sentenced to death or to very long prison sentences, he wrote.

“But despite this, there were citizens and politicians who simply denied the killings in concentration camps, such as Auschwitz. Because of that, the German Bundestag, the highest parliament of the Federal German Republic, adopted a law which declares Holocaust denial a punishable offence,” he wrote, asking “why is the same thing not happening in Bosnia and Herzegovina?”

If there are politicians who are blocking it in the parliament, then “it is the task of the High Representative” to bring about that law himself in order to protect rule of law, he wrote.

Otherwise called Chetnicks, the movement is known for atrocities committed against non-Serbs in Bosnia during WWII.

“More than one hundred Chetniks came dressed in black uniforms and yelled out their wartime songs, such as ‘there will be hell and the Drina will be a bloody again, the Chetniks are coming from the mountains’,” Schwarz-Schilling wrote.

The song refers to the river dividing Bosnia and Serbia. The Chetniks threw their slaughtered victims into the Drina, which Schwarz-Schilling called “the gravest crimes” along with those of the German Wehrmacht.

“Their chief commander, Draza Mihailovic, led this terrorist gang and murdered thousands of people,” he wrote, adding that Mihailovic was sentenced to death for it in Belgrade three years later.

“It was in his honour that this provocative event took place in March 2019!,” he wrote.

Schwarz-Schilling then quoted German newspaper ‘Taz’, which wrote that “fifty years later, in 1993, the events repeated: Serb extremists attacked the towns of Foca and Visegrad and killed thousands of Bosniaks, took the women who survived to rape camps – in a hotel three kilometres away from Visegrad – and threw the tied up men into the Drina river alive.”