Zurnal journalist: Prosecutors will likely not react to threats against me 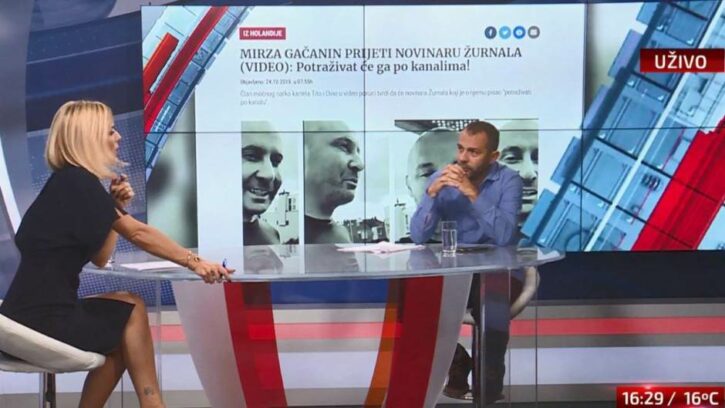 Avdo Avdic, the journalist of the ‘Zurnal’ investigative news website who recently received a threatening video message by a man he was investigating over his alleged connections with drug trafficking, told N1 on Tuesday that he does not think Bosnia’s judiciary will do anything about the threats.

“Whenever I would receive threats until now, and I receive them weekly, I wouldn’t report them or publish them. I think that is unnecessary and senseless and I don’t want to constantly turn myself into a victim,” Avdic said.

“But, considering that my family members have more or less gotten used to threats but perceive this one as a bit more serious, then I have to also do something about it, I have to react,” he stressed.

The video message features a man named Mirza Gacanin who, referring to Avdic, said in the video that “they will search for him in ditches.”

The threats came after Zurnal published a series of stories about an alleged case of money laundering and illegal drug trafficking.

Avdic alleged that Gacanin is a member of a drug cartel named ‘Tito and Dino’ which is also being investigated by the Drug Enforcement Administration (DEA) in the US.

“That cartel is now breaking down, its leader went to Dubai, another member of the cartel did as well, Mirza Gacanin is under investigation, dozens of his properties have been blocked in the Netherlands and some in Bosnia as well,” Avdic explained.

“This group can most likely be connected to several large shipments of cocaine that were seized,” Avdic said, adding that a 14-ton shipment of cocaine was discovered in 2016.

“According to estimates by the DEA and documents I have read, this drug cartel is among the 50 largest drug cartels in the world and is led by a Bosnian,” Avdic said.

“I would like to thank my numerous colleagues from other media, such as N1, and especially the Association of BH Journalists which alarmed international organisations,” he said, adding that the case was also raised by Reporters Without Borders and the Committee to Protect Journalists (CPJ) which “even offered me to move out of Bosnia and Herzegovina.”

Avdic said he informed State Police of the threats and provided evidence.

“The Prosecutor’s Office has not done anything,” he said.