BiH Deputy FM at OSCEMC: Dialogue among participating states has no alternative 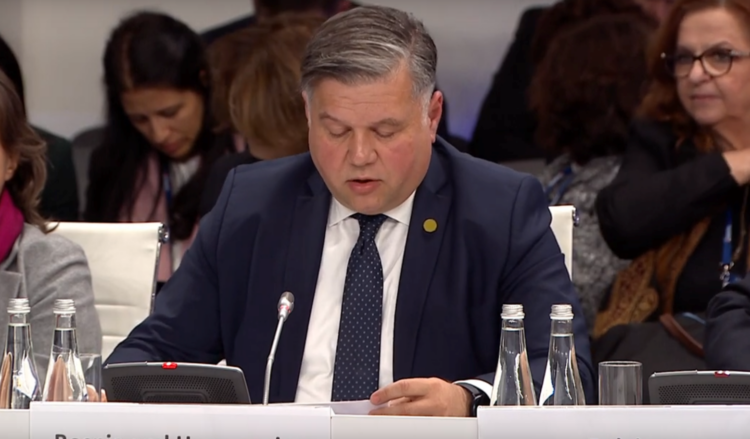 During its chairmanship of the OSCE Forum for Security Cooperation in the first trimester of 2023, Bosnia and Herzegovina will promote dialogue among OSCE participating states despite the “contaminated environment”, as it has no alternative, Deputy BiH Forign Affairs Minsiter, Josip Brkic, said at the Plenary Session of the 29th OSCE Ministerial Council in Poland on Thursday.

“Despite all diplomatic efforts, loss of lives and massive destruction of Ukrainian cities, civilians and energy infrastructure continue and worsen as winter is approaching. The horrors of Ukraine also brought back chilling memories to every citizen of Bosnia and Herzegovina of the bloody war on our soil 30 years ago. We have strongly believed that such civilian suffering would have remained a relic from the past. Unfortunately, it is happening again,” Brkic said, adding that this represents “an immense challenge for the OSCE participating states, European and global security and stability, and it requires the strong attention of the OSCE as the single most qualifies regional security organisation able to provide comprehensive assistance in resolving this crisis.”

“We deeply regret the lack of consensus on the continuation of the OSCE field presence in Ukraine, where our contribution as a country with the manpower was significant since the breakout of the crisis in 2014. We believe that the current OSCE projects and activities in Ukraine will serve its purposes, but will also be a bridge to full-scale post-conflict rehabilitation exercise,” he said.

Brkic stressed that, in order to preserve the organisation in these “challenging times”, there is an imperative need for a “more depoliticised dialogue of some of the organisation’s key initiatives, including the discussion on strengthening the effectiveness of the OSCE in order to reach concrete conclusions by 2025” when the organisation celebrates 50 years since the adoption of the Helsinki Final Act.

“In order to come to this, we need to agree on what the principles built in past decades in our basic documents mean for us today. The basic precondition for this is to achieve tangible results in conflict resolution. Dedicated leadership is a prerogative for survival. We sincerely believe that consensus will be reached on the OSCE chairmanship for the years ahead of us,” he said.

He said that BiH believes that the full implementation and further development of existing commitments in the political-military dimension is essential for enhancing military transparency and political stability in the OSCE area.

“Taking the chairmanship of the OSCE Forum for Security Cooperation in the first trimester of 2023, we will take a heavy burden on maintaining the discussion on transparency and confidence-building in circumstances of the brutal war in the OSCE region. Still, we strongly believe that despite the contaminated environment, the dialogue among OSCE participating states has no alternative. As the Chair, we will strive to continue and even revive the dialogue underlining the role of the FEC. This will not be possible without the support of all of you,” he said.

Brkic pointed out the need to advance the role of the OSCE in the field of climate and energy security in terms of its current and possible future commitments, including the role of its field operations.

“In this context, we support deepening overall OSCE activities within the second dimension, including expansion and shift of the overall activities of the OSCE field mission in BiH in this direction. After tremendous post-conflict work done by the field mission, it is the final time to adapt to more development-type agenda. We strongly believe that environmental and economic issues can bring people together and build bridges between communities in deeply divided societies,” he said.