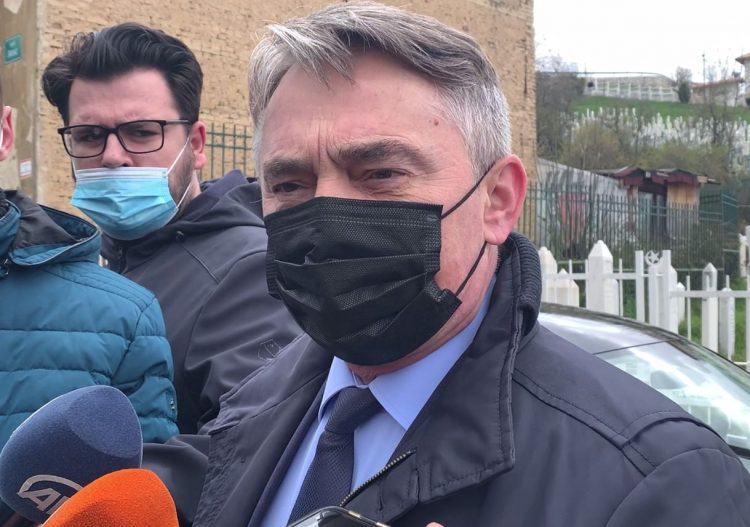 A non-paper allegedly sent by Slovenian Prime Minister Janez Jansa to Brussels, proposing the redrawing of borders in the Western Balkans which would include annexing parts of Bosnia to its neighbouring countries, has prompted condemnation in Sarajevo after online media outlet necenzurirano.si published its content on Thursday.

The document on the Western Balkans allegedly proposes Kosovo to join Albania and parts the Serb dominated part of Bosnia and Herzegovina to be included in Serbia and the country’s mostly Croat-populated parts to be annexed to Croatia.

It is not clear who drafted the document but according to some officials, it is an idea that is circulating among some EU members.

Not a new idea

But officials in Sarajevo argued that this idea is exactly what prompted the 1992-95 Bosnian war and would do the same again if pursued.

The Croat member of Bosnia's tripartite Presidency, Zeljko Komsic, said that the document implies that Bosnia and Herzegovina would no longer exist.

“They are proposing an option that was offered to us even before the war began, and it was offered during the war as well,” Komsic said.

The paper is motivated by “anti-Islamism and anti-Semitism,” which is “the real evil we need to talk about here,” Komsic explained.

He pointed out that it was dangerous that “extreme fascism” and nationalism have prevailed in some European countries.

“Of course it is more dangerous now than it was before because it grabbed all the instruments of power. We can no longer talk about a moderate Christian right, we are now facing something that is terribly reminiscent of the World War II period and it is happening under the roof of that European house. It seems that these ‘European friends’ have very quickly forgotten the historical experience of Hitler,” he said.

Komsic said that Croatia had drafted a similar paper which was not this harsh but that it was essentially seeking a division of BiH based on ethnicity.

Komsic’s Bosniak colleague in the Presidency, Sefik Dzaferovic, said clearly that the ideas proposed by the non-papers are “leading BiH and the entire region toward a war,” which he said he will not allow.

“We will not allow the territorial integrity, independence and sovereignty of BiH to be attacked at any price. Everyone must be aware of that. Everyone who does that is dragging BiH, the region and Europe into war. That, I think, does not suit anyone,” said Dzaferovic.

He reminded that throughout history empires that tried to wipe out Bosnia and Herzegovina, in the end, all fell apart themselves.

“I call on all these retrograde forces in BiH and in the BiH neighbourhood, Europe and the world. History is the teacher of life. Let them finally learn something from history. Empires came, fell, passed, BiH remained and survived,” he said, declaring that Bosnians who love their country will fight against these attacks and count on the help of the civilized world because if ideas like these prevail, “then there is no future for the world.”

Bosnia’s future, he said, is in NATO, the EU as a sovereign, democratic country.

Commenting on the document, Bosnia’s Foreign Minister, Bisera Turkovic, said that someone was trying to open “Pandora's box, destabilize the situation in the Western Balkans.”

“For a long time now, as BiH, we have been fighting in international circles with malignant propaganda and a kind of hybrid war against the Euro-Atlantic interests of BiH and its citizens. I see all this in that context,” Turkovic said.

Dodik: Dissolution of Bosnia should remain an option, but not through war

However, the Chairman of the three-member Presidency of Bosnia and Herzegovina, Serb representative Milorad Dodik, who is visiting Belgrade to accept another donation of vaccines from Serbia, said that the idea of ​​a peaceful breakup in BiH is not new and it exists as a consequence of the fact that the country can not function with the current setup.

He said he will keep coming to Belgrade to persuade President Aleksandar Vucic to accept such a concept.

“Regardless of the fact that I understand the way he views regional and other relations and that Serbia has international obligations, I certainly think that the option of a peaceful separation should be put as one of the relevant options in the future,” he said.

He pointed out that the two are trying to stop any conversation about a peaceful separation as they advocate a unitary country dominated by Muslims.

“So a peaceful breakup should be put as one of the options that should be one of the more important things to be discussed. And whether it will be peaceful or something violent does not depend on us,” but rather on big powers.

Dodik said he is against war and doesn’t want to put Serbs anywhere near a war solution.

“But I will be persistent in insisting that BiH cannot succeed if there is no basic agreement on anything,” he said.

The Dayton Peace Agreement that ended the war was brokered by an ideology of ​​a great liberal order in the world, which believed that peoples who fought against each other could reconcile.

Serbia’s President, Aleksandar Vucic, said he does not know of any initiative based on the document.

“I have no idea what this is about,” Vucic said.

“We are interested in economic development, progress, to help our own, but also other nations,” he argued.