Dodik: Criminal complaints against ambassadors who joined sanctions on Russia 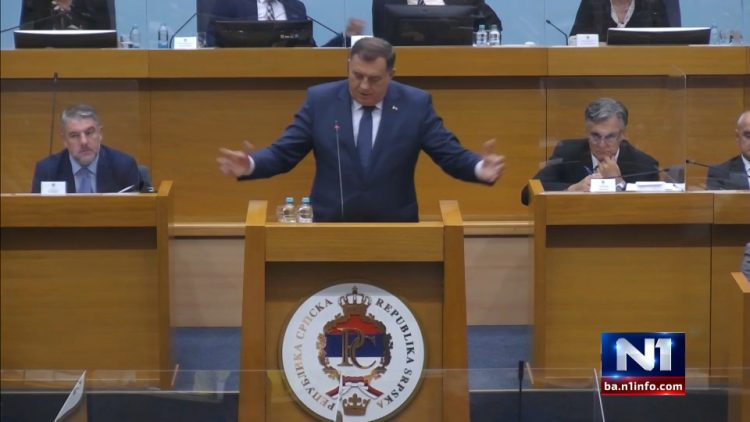 The foreign policy of Bosnia and Herzegovina has failed, Serb member of Bosnia's tripartite Presidency Milorad Dodik said at the opening of special session of the entity parliament of Republika Srpska, Bosnia's Serb-majority region, which is also attended by Russian ambassador Igor Kalabukhov.

“I came to ask the parliament many specific questions so I can adjust my behaviour in regard with the challenges lying ahead of us,” Dodik told the delegates.

He said that Republika Srpska, one of two Bosnia's semi-autonomous entities where the Serb Presidency member is elected, is not an “important geopolitical factor,” but when it comes to Bosnia and Herzegovina “it is crucial.”

Dodik is addressing the delegates just prior to the address of the Russian ambassador to Bosnia and Herzegovina.

According to Dodik, “the special military operation of Russia” from February this year was a reason to convene this session.

Dodik also spoke about sanctions against Russia and the position of Bosnia and Herzegovina in regard with that, noting that there were those among the Bosnian diplomats who were joining the sanctions “individually.”

He said he launched criminal complaints against all the ambassadors who “unilaterally joined the sanctions,” including Bosnian ambassador to UN Sven Alkalaj and Bosnian Foreign Minister Bisera Turkovic.

Earlier on Monday, RS National Assembly Deputy Speaker Denis Sulic confirmed that the entity parliament also approved the attendance of the representatives of the European Union in Bosnia and Herzegovina and the Office of the High Representative in the session.

According to Branislav Borenovic, the leader of the opposition PDP party, Sulic told him that the Serbian ambassador to BiH was not invited.