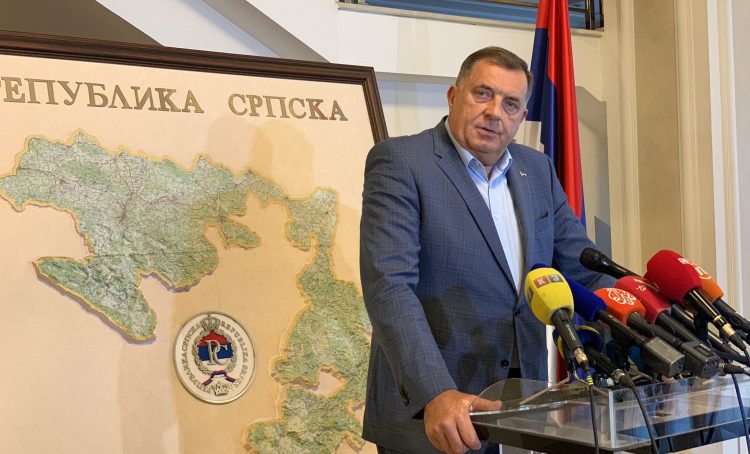 Despite the boycott of the state institutions of Bosnia and Herzegovina, the Serb member of Bosnia's tripartite Presidency Milorad Dodik confirmed on Tuesday he would appear at the Presidency building for the meeting with Turkish President Recep Tayyip Erdogan, who will visit Sarajevo this week.

“I will show up in the meeting. Erdogan is a great leader of a great state,” Dodik told reporters during a press conference on Tuesday.

This comes weeks after the leadership of Bosnia's Serbi-dominated region, Republika Srpska, where Dodik was elected, announced a boycott of institutions at the state-level, following the ban on genocide denial and glorification of war criminals that the now-former international envoy Valentin Inzko imposed through law amendments only days before the end of this term.

This sparked fury among the political leadership in Republika Srpska, whose institutions declared the law null and void and whose politicians who take part in the state-level government announced they would no longer take part in the decision-making process.

Dodik's attendance in the meeting with Erdogan, alongside other two Residency members – Bosniak Sefik Dzaferovic and Croat Zeljko Komsic, would mean the termination of the boycott.

Dodik explained he is not willing to allow Dzaferovic and Komsic tell only their views and that he will participate in the Presidency sessions so he can protect Republika Srpska by invoking the vital national interest.

“These are all the things I find important to be there for and to speak about so that Erdogan understands, and to remind him that he said it is in his interest to have all sides in BiH cooperate and that he is not favouring anyone. My presence at the Presidency building will be only about this, said Dodik, adding that this was not a justification but only an explanation.

He once again slammed the international envoy over the imposed laws and reiterated that he is not recognising the new High Representative who took office earlier this month.