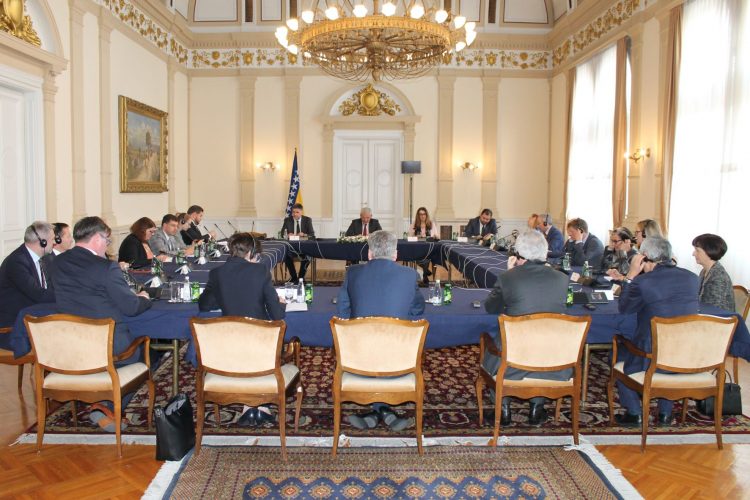 Bosnia Presidency Chairman Sefik Dzaferovic met the ambassador of the European Union member states and the G7 countries, to discuss the Russian Federation's attack on Ukraine as well as the stances and activities that the institutions of Bosnia and Herzegovina took in regard with that matter, in cooperation with the international community.

The ambassadors expressed gratitude to Bosnia and Herzegovina for joining the UN General Assembly resolution condemning Russian aggression against Ukraine, to the draft resolution of the UN Security Council as well as the stances and measures that the EU took on this issue.

Dzaferovic once again condemned the Russian aggression against Ukraine, reaffirmed the support for the sovereignty and territorial integrity of Ukraine, and expressed the commitment to the positions of the European Union and the G7 regarding the situation in Ukraine.

He expressed support to the request of the EU and G7 member states for the Russian Federation to immediately withdraw its troops from Ukraine, to stop using military force against Ukraine and reckless violations of humanitarian law through attacks on civilians and civilian facilities, including hospitals.

The Chairman joined the demands addressed to the Russian Federation to open humanitarian corridors to the besieged cities and areas in Ukraine and to enable the delivery of humanitarian aid to the endangered population. He said he shared the concerns and condemnations of the international community when it came to threats about the possible use of nuclear weapons.

Regarding the ambassadors’ request on the implementation of restrictive measures, Dzaferovic said that he asked the Bosnian Council of Ministers to meet the obligations and implement restrictive measures provided by EU acts which Bosnia and Herzegovina officially joined.