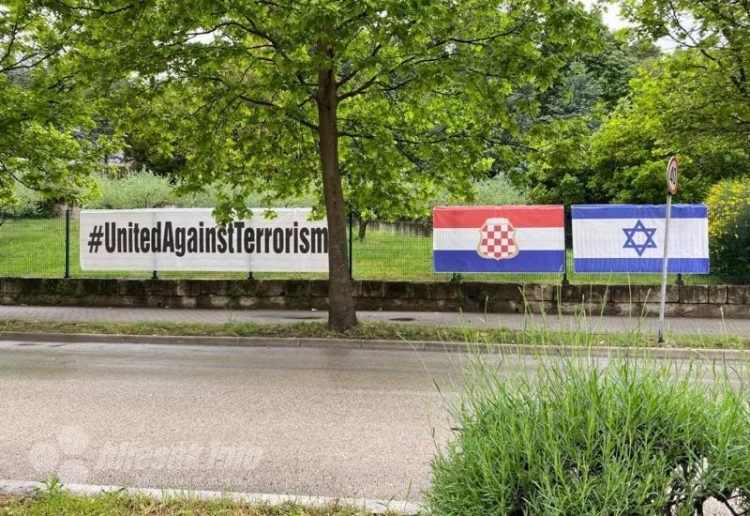 After the flag of Palestine was projected on the Old Bridge in Mostar a few days ago as a sign of support for the Palestinian victims, this morning the flag of Israel was hoisted on one of a fence in this city, along with the flag of the so-called Herceg-Bosna para-state with the message: "United against terrorism".

According to Bljesak.info portal, earlier, flags of Israel and the so-called Herceg-Bosna were set next to the billboard of the West-Herzegovina Canton (ZHK) Government. A video showing this was posted on Twitter.

Controversy also emerged when Israeli President Benjamin Netanyahu posted on his Twitter account his gratitude to the countries that supported Israel in this conflict which contained the BiH flag. This provoked numerous reactions in the country, for and against such a move.

Herzeg-Bosnia was established in the south of Bosnia and Herzegovina in 1991 during the war in the country. Its armed forces, the Croatian Defence Council (HVO), were first allied with Bosniak armed forces. But the HVO and Bosnia's Army turned against each other after the parastate declared itself a republic on August 28, 1993, and changed its name into the Croatian Republic of Herzeg-Bosna, with Mostar being its capital.

The parastate had the ambition to become part of neighbouring Croatia.

The Croat-Bosniak conflict ended in 1994 with an agreement brokered in Washington, D.C. which prescribed the creation of a Bosniak-Croat Federation entity (FBiH) out of territories controlled by Bosniaks and Bosnian Croats. Herzeg-Bosna was abolished two years later.