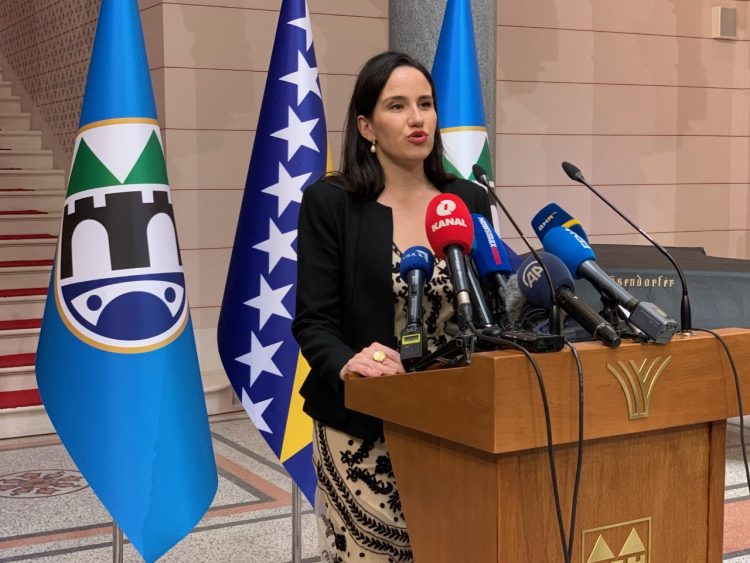 Russian Embassy in Sarajevo strongly reacted to the agreement on friendly relations that mayors of Sarajevo and Kyiv signed on Monday during an international event in Brussels, calling it “hypocritical” and asking mayor Benjamina Karic if she will now “ban the Russian culture, Russian music and Russian ballet” in the capital city of Bosnia and Herzegovina. Karic promptly responded, saying that those will always be welcome in Sarajevo unlike “Russian aggressor forces” and that she will not allow Russia to "give us lectures about morality."

Karic accepted the invitation by Kyiv Mayor Vitaliy Klitschko earlier this month to attend Kyiv Investment Forum which was, due to security reasons, held in Brussels.

On this occasion, the mayors signed an agreement on establishing friendly relations between Sarajevo any Kyiv in a wide range of areas for their mutual benefits.

Reacting to the agreement, the Russian Embassy to Bosnia and Herzegovina said that each part of the document is “filled with hypocrisy.”

Referring to the Article 1, which says that Kyiv and Sarajevo profess European values of democracy, freedom and the rule of law, the embassy asked “what kind of rule of law one can talk about with those who usurped government as a result of a coup of 2014, which started the long-lasting tragic events in Donbass?”

A lengthy post published on the embassy's official Facebook account also asked “what kind of peaceful coexistence one can talk about with those who, which is already certain, planned to use force to take over the territories where people used free democratic vote to express opposition against fascist regime?”.

Addressing mayor Karic herself, the embassy asked if the signed agreement means changes in the Bosnian capital.

“Is she going to ban Russian culture, Russian music, and Russian ballet in the capital city of Bosnia and Herzegovina? Does this mean Mrs Karic will, in line with the Article 4, send volunteers from Sarajevo to help Ukrainian neo-Nazis? And finally – as the top absurd – if the document was signed in Ukrainian and English languages, does that mean that Mrs Karic is renouncing Bosnian, Serbian and Croatian languages in which, among the others, all agreements between Bosnia and Herzegovina and the Russian Federation were signed,” reads the message.

“You are not relevant to speak about human rights, international law and coexistence in Europe. Because the very fact that your flag is lowered in the Council of Europe says enough that you no longer belong to the European values that all sovereign and independent states of Europe have jointly created. Your behaviour and actions have separated you from the European family, because of which the whole of Europe is suffering as well as the citizens of the Russian Federation,” Karic stressed.

She recalled that the Ukrainian authorities were elected in democratic elections, and that Bosnia and Herzegovina clearly expressed support at the UN General Assembly to the territorial integrity and sovereignty of Ukraine.

“The people of Ukraine suffer on daily basis due to the aggression of the Russian Federation on the territory of Ukraine and annexing the Ukrainian territories is contrary to the international law,” Karic said.

Responding to the question whether she would now ban Russian culture, music and ballet in Sarajevo, Karic stressed that they were always welcome in the capital of Bosnia and Herzegovina just like any other culture.

“Russian aggressor forces are not welcome neither today nor were they welcome in the 1992-1995 period when the same those who took part in the siege of Sarajevo are taking part in war crimes today. To be fair, there were Ukrainian volunteers who participated in the siege of Sarajevo but we do not identify one whole nation with their criminals nor do we identify the Russian people with aggressors and criminals who are killing today thousands of innocent ones in Ukraine,” said the mayor.

She called the “Putin's Russia” a leading force of “terror, discrimination, suppressing of truth and spreading of lies in the world.”

“I will not allow the country that vetoed the Resolution on genocide in Srebrenica at the Security Council to give us lectures about morality,” she underlined.