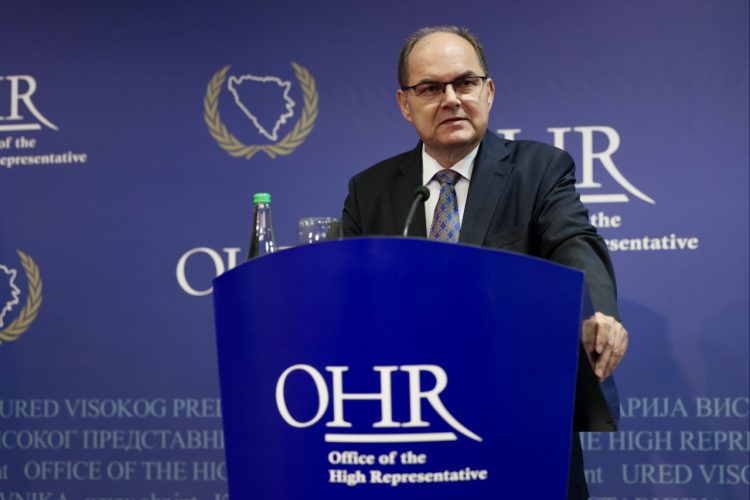 N1 learned from several diplomatic sources Wednesday that by August 1, High Representative in BiH Christian Schmidt will impose measures for the re-functioning of the Federation of Bosnia and Herzegovina (FBiH) entity.

The draft decision, which has already been sent to the addresses of embassies in BiH, contains changes to the Election Law in relation to the functioning of the chambers of Parliament, the election of the leadership of the FBiH, the election of judges of the FBiH Constitutional Court, as well as numerous changes that should ensure the integrity of the election process.

Among other things, the draft decision states that “legislative expediency shall be improved by the provision that each House (the House of Representatives and the House of Peoples) shall be obliged to reject or approve legislation within a clean deadline after the approval in the other House.

(Each House is expected to reject or approve the necessary laws within 45 days of approval in the other chamber. If the deadline is not met, the law will be included in the agenda of that chamber at the next session after the expiration of the 45-day period, and no later than within 30 days from the expiration of that period.”)

– The discussions on the formation of the authorities shall be made inclusive by means of successively decreasing the voter threshold for the nomination of candidates for the Presidency of the Federation of BiH should delegates fail to nominate the candidates within set deadlines. The nomination of candidates shall require the votes of at least 8 delegates in each of the caucuses of the House of Peoples. If one caucus fails to nominate a candidate within a deadline of 30 days, the number of delegates needed to do so shall be reduced to 5. If again this does not lead to a nomination, the nomination by any group of 2 delegates will be possible after another 30 days.

– The process of nomination of judges to the Federation of BiH Constitutional Court shall be unblocked. Four positions are currently vacant after the President of the Federation refused to perform his duty for more than five years. Clear deadlines shall be in place for the authorities to decide on the appointment of judges to the Constitutional Court. Under the enacted decision, if the Presidency of the Federation fails to nominate judges within a certain timeline, the House of Peoples will need to vote on the list provided by the High Judicial and Prosecutorial Council. In addition, the procedure of appointment of members to the Vital National Interest Protection Panel shall be moved from the Parliament to the Court itself, which will appoint judges to the Panel from within its own ranks.

– A deadline shall be added for the President and Vice-President of the Federation of BiH to appoint the FBiH Government.

The functionality of the institutions of the FBiH has to be restored to avoid a scenario where institutions could be blocked by one or several political parties. Therefore, it is necessary for constituent peoples to have solid constitutional safeguards according to the Dayton Peace Agreement while ensuring that these safeguards cannot be abused to paralyse the system, stated the explanation of the measures, which should be officially announced by August 1.

The decision will enter into force upon its publication in the Official Gazette of Bosnia and Herzegovina, without delay.