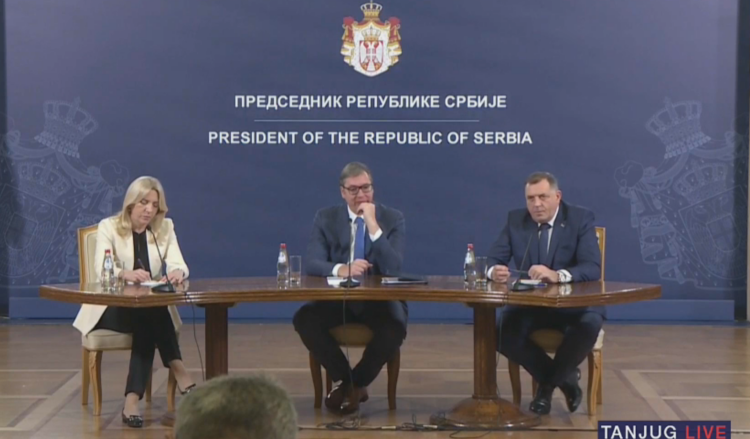 Bosnia Presidency Chair Zeljka Cvijanovic and President of Bosnia's Serb-majority region Milorad Dodik met with Serbian President Aleksandar Vucic on Thursday to discuss joint projects planned by Serbia and Bosnian entity as well as strengthening of their "integration through joint programmes," as emphasised by Dodik.

“It is important to stress the commitment we heard about here. It was emphasised that cooperation on projects will continue,” said Dodik addressing the media after the meeting.

He welcomed Serbia's stance on supporting the territorial integrity of Bosnia and Herzegovina, but said it was important that Serbian President knows that “Republika Srpska is in jeopardy when it comes to its constitutional rights.”

Dodik stressed the need to return to “original Dayton,” referring to the peace deal that ended the 1992-95 war and established Bosnia's constitutional system.

“Until that happens, we see no reason to give our contribution to Bosnia and Herzegovina,” he stressed.

Dodik, who assumed the post of Republika Srpska President after the victory in the October 2 elections, said he would work in the upcoming period on the “integration of Republika Srpska and Serbia through joint programmes in education and culture sectors, within the special relations.”

He also announced a joint session of governments of Serbia and Republika Srpska early next month.

Serb member of Bosnia's tripartite Presidency Zeljka Cvijanovic said she would like to contribute to better relations between the two countries.

“It does not depend on me only. I wish we could shift from the stage where we in BiH have querulous stance towards the external world to the path where we would see the benefits of implementation of certain projects, where we wouldn't use them as a way to block things or something,” she said and thanked Serbia for being a partner in various projects.

“I thank to the people of Republika Srpska for standing next to its Serbia at every moment,” said Vucic.