Orban's statements about integration of Bosnian Muslims slammed as ‘scandalous’ 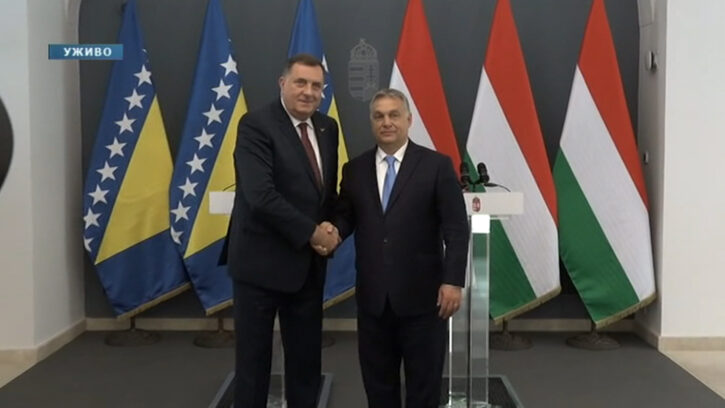 Statement by Hungarian Prime Minister Viktor Orban about what he called a challenge of integrating Bosnia and its two million Muslims into the European Union sparked strong reactions in public, with some assessing it as “scandalous” and calling the official “a racist.”

Addressing a press conference on Tuesday, Orban also answered questions about Bosnia and Herzegovina, saying that, in terms of the EU enlargement, “the challenge with Bosnia is how to integrate a country with two million Muslims.”

He also said the Serbian nation is the key to the Balkans and that Bosnia cannot be stabilised without the Bosnian Serbs.

Swedish politician of Bosnian origin, Aida Hadzialic, was among the first ones to comment on Orban's statement.

“Bosnia-Herzegovina and its people are as European and indigenous as Hungary and Hungarians. A majority is secular and Bosnia is considered the most liberal Muslim majority country in the world,” said Hadzialic, who served as the youngest minister in the government of Sweden.

Mr Kovacs,
Bosnia-Herzegovina and its people are as European and indigenous as Hungary and Hungarians. A majority is secular and Bosnia is considered the most liberal Muslim majority country in the world.

Let’s stand up for European values such as democracy and the rule of law. https://t.co/7gXpWE2Gl7

Bosnia's leftist Our Party called Orban “a racist” and urged other EU leaders to express their stances on the matter, to show if any of them share Orban's opinion.

“Does anyone else think that Muslims pose a problem to the European Union,” said the party's statement.

The party also noted that Orban's visit to Sarajevo, announced for January 25 should be banned.

Head of Bosnia's top Islamic authority, Reis-ul-ulema Husein Kavazovic, called Orban's statement “scandalous” and said that it raises concerns not only among Muslims in Bosnia but among everyone in Europe.

“If xenophobic and racist ideologies become the basis for the policies of a united Europe or its members, then it takes us back to some not-so-distant times of our past when European unity was tried to be built on similar fascist, Nazi, violent and genocidal ideologies that led to The Holocaust and other horrific crimes,” he added and called Orban to clarify his statement.

The Hungarian official's message sparked a series of reactions on social media as well.

Former Foreign Minister of Croatia Vesna Pusic said that Bosnian Muslims are integrated Europeans and a living proof that Islam is also a European religion.

Only somebody who knows nothing about Bosnia (BH) can say that. BH Muslims are integrated Europeans and a living proof that Islam is also a European religion. They are manifestly not the problem. It is Dodik and Čović who are the problem and who are disintegrating BH https://t.co/eJB3fNwikY

Bosnia's ambassador to Czechia Martina Mlinarevic wondered how would her multi-religious family integrate and she called the stance “humiliating.”

This is really humiliating.
Mr. State Sec., I am proud Bosnian and Herzegovinian, with my parents being catholics, my husband's mother being muslim, his father being ortodox, us 2 atheists & how will you integrate my 'crazy' family? You know NOTHING about my courageous country. https://t.co/UKf6tQt46w

Journalist Dragan Bursac called the statement “shameful.” In a lengthy Facebook post he described the multi-religious and multi-cultural nature of Bosnia and Herzegovina and his own surrounding, concluding that the problem is not in Bosnia but in Orban's “own fascism.”

“And I will tell you, I have not seen bigger Europeans than the Bosniaks are, and they can indeed not go to the same place where you go. And that's why Bosnia and Herzegovina will be European with its Muslims, because that's how it is without asking you,” he underscored.