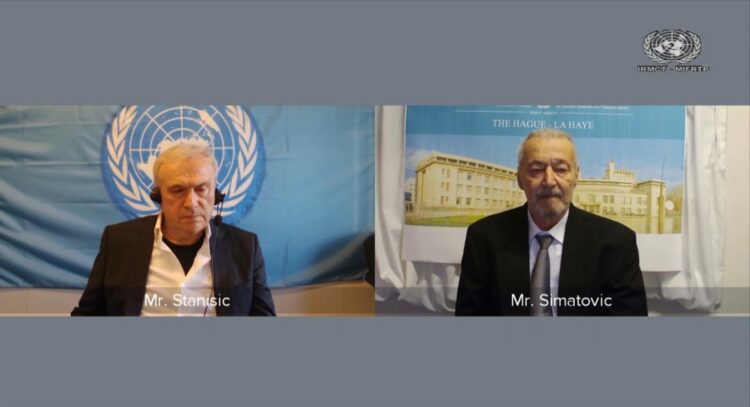 Former senior Serbian State Security Service (SDB) officials Jovica Stanisic and Franko Simatovic, both sentenced to 12 years in prison by the UN criminal tribunal in The Hague for war crimes against Croats and Bosniaks in Bosnia and Herzegovina in the early 1990s, have appealed the ruling, their lawyers said on Tuesday.

In a retrial in 2021, the two former intelligence officers were found guilty of complicity in the persecution, killing, forcible transfer and deportation of Croats and Bosniaks in Bosanski Samac, northeastern Bosnia and Herzegovina.

Stanisic and Simatovic were arrested by Serbian authorities in 2003. Simatovic was transferred to The Hague on 30 May and Stanisic on 11 June of that year. They were acquitted in May 2013, but the Appeals Chamber quashed the ruling and ordered a retrial.

In 2017, the prosecution demanded life imprisonment for both accused, while the defence called for confirmation of the 2013 acquittals.

Explaining Stanisic's appeal on Tuesday, his lawyer Wayne Jordash said that the Trial Chamber erred in law when it found him guilty of aiding and abetting the crimes committed in Bosanski Samac by Red Berets.

The lawyer pointed out that Stanisic was found guilty only based on the fact that Red Berets had been trained in an SDB camp before being sent to Bosanski Samac in the spring of 1992. He added that no evidence was provided to prove that Stanisic was aware that such training would result in concrete crimes in Bosanski Samac, Beta news agency reported from The Hague.

According to the Trial Chamber ruling, Stanisic and Simatovic did not directly participate in a joint criminal enterprise aimed at forcibly removing non-Serbs from Croatia and Bosnia and Herzegovina, but knew of it. The ruling also found that the perpetrators of war crimes in Bosanski Samac were not under Stanisic's command at the time but under the command of the Yugoslav People's Army (JNA).

Another lawyer for Stanisic, Joe Holmes, said that the prison term of 12 years was obviously exaggerated, adding that the Trial Chamber did not take into account mitigating circumstances. He said that the fact that the trial has been going on for nearly two decades should shock the conscience of all parties involved.

Speaking of mitigating circumstances, Holmes said that Stanisic neither ordered the training nor participated in it and that his responsibility was derived from his position.

Defence counsel for Simatovic will present their arguments in the continuation of the hearing.

The two defendants are in the custody of the tribunal's detention unit in the Hague district of Scheveningen. A final judgment in their case is expected by the end of June.