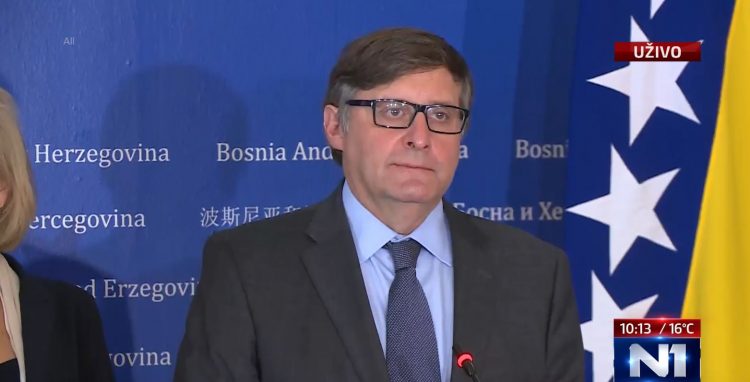 US Envoy for the Western Balkans Matthew Palmer said that it was an urgent and strategically important task for Bosnia and Herzegovina to amend its election system and incorporate the European Court of Human Rights ruling in the 'Sejdić-Finci' case in the changes so that the country can move forward.

Therefore the local leaders should make a compromise and show political courage to make the country move forward, Palmer said in an interview for the Croatian Hina news agency after he attended the Dubrovnik Forum on Saturday.

The US official said that in his opinion it was important to incorporate the European Court of Human Rights (ECHR) decision in the Sejdic-Finci case in whatever compromise all stakeholders may reach.

Jakob Finci, a Bosnian Jew, and Dervo Sejdic, a Bosnian Roma, took legal action against Bosnia and Herzegovina because the existing legislation makes it impossible for them who are ethnic minorities to be elected officials of the country's presidency or as deputies to the upper house of the bicameral state parliament. In 2009, the European Court of Human Rights ruled in their favour.

Palmer on Ljubic case: It's up to all parties to reach compromise

Hina also asked Palmer about his opinion on the Bosnian Constitutional Court's ruling in the Ljubic case concerning the right of the Bosnian Croats, one of the three constituent peoples, to elect their representatives and to prevent scenarios in which more numerous constituent peoples can outvote them and actually have a say in the election of the less numerous people's representatives – which the current electoral legislation allows.

Palmer said that all the parties should talk about the Ljubic case ruling, however, the US official did not want to hint at the possibilities that would be on the table.

It is up to the parties to deal with this issue, with the support and encouragement of the international community, he said.

In his comment on the Bosnian Croat leaders’ statement that the failure to include the Ljubic case ruling in the reform of the election system would amount to the breach of the country's constitutional principle of the equality of the three constituent nations, Palmer said that it was on the parties to talk and see how much comprehensive agreement should be.

Palmer said he was optimistic and that he believes in compromise in Bosnia and Herzegovina.

It is possible but it requires hard work, he added.

Palmer commented that the case of Mostar, where agreement had finally been reached on the local elections rules after a 12-year stalemate, showed that compromise was possible.