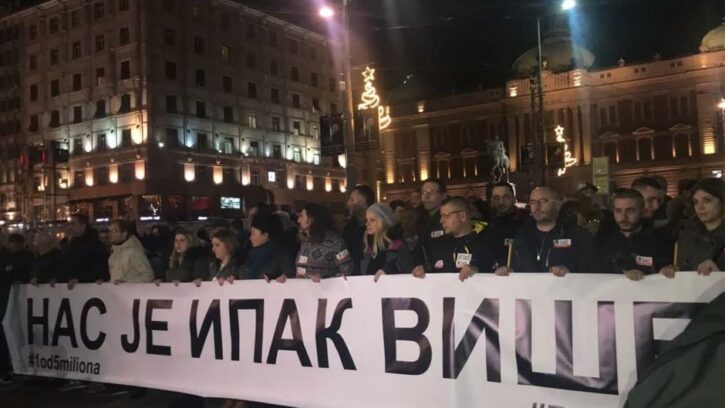 Thousands of people gathered in central Belgrade on Wednesday evening for what organizers said was a memorial march on the anniversary of the murder of Kosovo Serb opposition leader Oliver Ivanovic.

“We will march in silence because we all want to know the answer to the question who said kill him,” Actor Branislav Trifunovic, who has spoken at all the weekly protests in Belgrade to date, told the crowd.

“One year later and we still don’t know who killed him. We have just been told who did not kill him. We will march tonight to the (St Sava) Temple in honour of Oliver Ivanovic, a man who used his head and who fought for peace and life together of Serbs and Albanians in Kosovo,” Trifunovic said.

He asked the crowd to put away their whistles and banners for the memorial march and to light candles and hold up their phones at Slavija square just below the temple “to show that there are more of us”.

A banner quoting Ivanovic’s words There Are More of Us was carried by protesters at the front of the column.

The march was attended by activists of the Local Front from Kraljevo who left their home town on January 12 to walk to Belgrade.

Ivanovic’s common-law wife Milena Popovic attended a memorial at St Sava Temple on Wednesday morning while his brother and other relatives attended a memorial service in their home town of Kosovska Mitrovica where Ivanovic was killed in front of his party offices.

Ivanovic was shot dead in front of his party offices in North Mitrovica in mid-January 2018. The investigation into Ivanovic’s death is still ongoing.