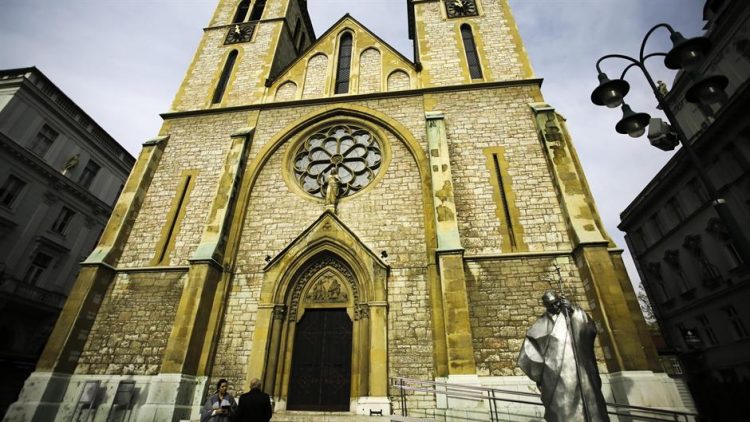 Croatian Foreign Minister Gordan Grlic-Radman, Parliament Speaker Gordan Jandroković and the leader of Homeland Movement Miroslav Skoro have voiced their support for Bosnian Cardinal Vinko Puljic and the plan to hold a controversial Catholic mass for the Bleiburg killings marking the 75th anniversary since the event.

“Minister Grlic-Radman and Cardinal Puljic expressed satisfaction with the continuation of fostering remembrance through the commemorative events planned in Bleiburg, Sarajevo and Zagreb. According to the protocol, wreaths will be laid at Zagreb's Mirogoj Cemetery, the tribute will be paid to the victims at Bleiburg in the presence of the Croatian ambassador, and in Sarajevo, the Archbishop of Sarajevo, Cardinal Vinko Puljic, will say a memorial mass. The minister and the dignitary pointed out the importance of paying tribute to the dead in a dignified manner and keeping the memory of all innocent and tortured victims killed without any trial alive,” the Croatian Ministry said in their statement.

The Ministry noted that the mass, planned for 16 May, is part of the programmes prepared to commemorate the 75th anniversary of the tragedy which happened in the Loibach field near the Austrian town of Bleiburg and the sufferings during the so-called the Way of the Cross of the Croats in the wake of the Second World War.

Until this year, the commemorations were held in the Loibach field in the southern region of Carinthia, in tribute to tens of thousands of Croatian civilians and soldiers of the defeated pro-Nazi Independent State of Croatia (NDH) who surrendered to allied forces there in May 1945 but were handed over by British troops to Tito-led Yugoslav partisans. Some of those civilians and soldiers were executed on the spot, while many perished during so-called death marches back to Yugoslavia.

The central commemoration of the Bleiburg victims is held under the auspices of the Croatian parliament, but due to the coronavirus epidemic this year it will not be held in Bleiburg, but the victims will be commemorated in three places, in Bleiburg, Zagreb and Sarajevo.

The Speaker of the Croatian Parliament, Gordan Jandrokovic, also commented on the reactions to the holding of the Mass in Sarajevo, May 16.

“These are very inappropriate attacks on Cardinal Puljic, who spent the entire war (1992-1995) in Sarajevo, who helped the people of Sarajevo through Caritas during the war, and who twice invited and welcomed the Pope in Sarajevo. The man serves a mass for the victims. This is not a glorification of the Independent State of Croatia. He serves a mass for the souls of the dead, who were killed and tortured without trial, there were soldiers and civilians who were captured and brutally killed. It is a crime of the communist system and a mass is served in that name,” Jandrokovic said.

The commemoration has caused a torrent of condemnation ranging from local officials like Bosnia's Croat and Bosniak Presidency members, Sarajevo city officials, the local Jewish Municipality and Jewish representatives from the country, to the Israeli Embassy and the World Jewish Council – all expressing their belief that the Church leg by Vinko Puljic decided to support and hold the mass in Sarajevo, where tens of thousands of innocent anti-fascists and civilians were killed by the NDH.