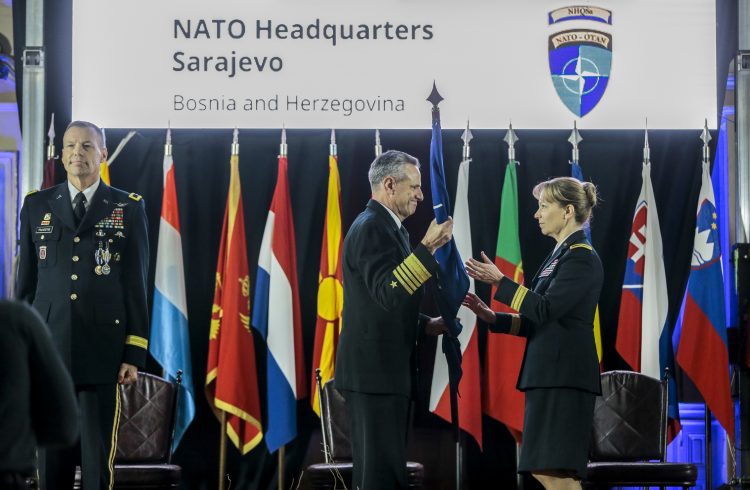 Brigadier General (BG) Eric Folkestad (US Army) handed over command over the NATO HQ Sarajevo to Brigadier General Pamela McGaha (US Army) in an official ceremony presided over by the JFC Naples Commander Admiral Robert P. Burke on Tuesday.

BG Folkestad assumed command of the Headquarters one year ago, and lead important initiatives in supporting local institutions, to include BiH Ministry of Defence and Armed Forces in their reform efforts, under the umbrella of NATO's Partnership for Peace.

“I have traveled widely in this country and people everywhere say they only want life made better so they can live here and provide a future for their families. I congratulate the Ministry of Defense and the Joint Staff for leading with courage to give young people a better future in their armed forces and to create more opportunity for them to stay in Bosnia and Herzegovina.”

BG McGaha arrives from her role as the Commanding General of 143d Sustainment Command in Orlando, Florida. The 143d is the largest expeditionary sustainment command in the US Army, with more than 8135 Soliders, over 100 civilians and 90 units across ten states.
Accepting the command, BG McGaha said:

“It is an honour to stand here today and to be afforded the incredible privilege of Commanding NATO Headquarters Sarajevo. As some of you know, this is not my first time in the region. I was stationed here in 1996-97 – playing my own small role in helping lay the groundwork for peace and security. I look forward to finding new ways to engage, not just with the Armed Forces, but the wider population of BiH too. Because, ultimately, it is those citizens we are here to support.”