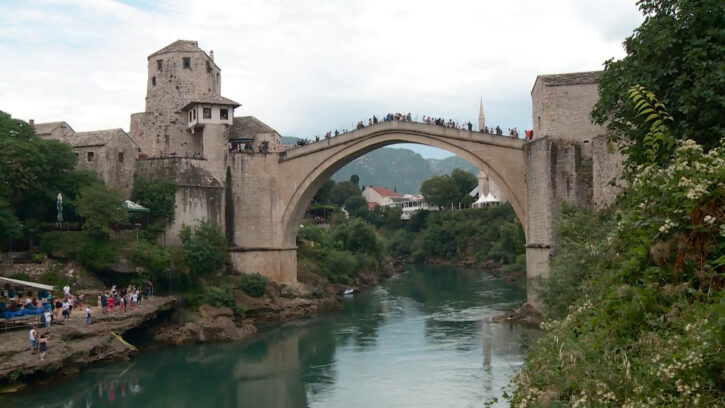 CNN listed the Bosnian city of Mostar among Europe’s 15 most beautiful towns Thursday, along with the Croatian town of Korcula and the Slovenian town of Piran.

“Mostar's Stari Most, or “Old Bridge,” built by the Ottomans in the 16th century, was long considered one of the finest examples of Balkan Islamic architecture.

Arcing high across the Neretva river, it's one of the most famous sights in the Balkans, and traditionally locals dive from the bridge – today it's a stop on the Red Bull Cliff Diving World Series.

The bridge was destroyed in November 1993 by Croat forces during the Balkan wars. A reconstructed bridge was built in 2004, and today, Mostar is a beloved destination in Bosnia and Herzegovina, and a popular day trip from Dubrovnik, over the border in Croatia,” CNN wrote.

For Korcula, they said that “locals say adventurer Marco Polo was born here; Venetians dispute that. Either way, it's a world-class town, with gleaming white streets and buildings hewn from local stone, water almost all the way round, and beautiful buildings left by the Venetians, who ruled here for centuries.”

“Though small, Slovenian stretch of coast, sandwiched between Italy and Croatia, is home to several beautiful towns, including Piran. Developed by the Venetians, who conquered it in 1283, it's a beautiful mini Venice, with a stout belltower, frothy architecture, and fishing boats docked in the tiny harbor,” the description on CNN’s top 15 list says.