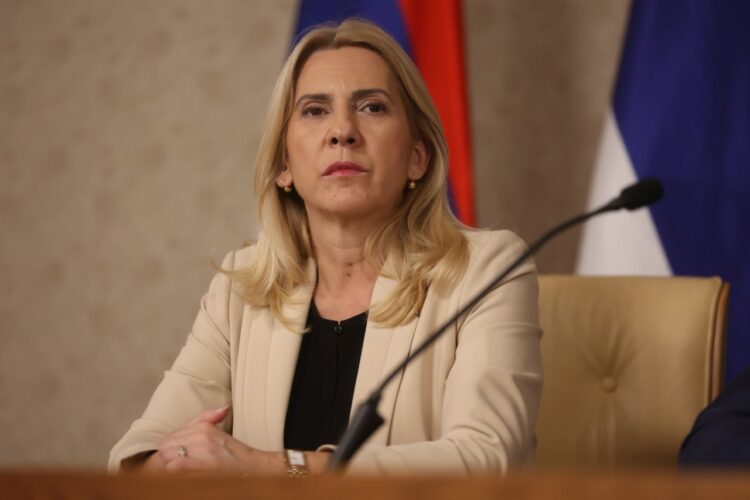 The Bosnian Serb member of BiH’s tripartite Presidency, Zeljka Cvijanovic, and the President of the country’s Republika Srpska (RS) entity, Milorad Dodik, strongly condemned the Constitutuonal Court ruling to abolish the RS Law on Medicines and Medical Devices, arguing that it was a “political” decision.

Bosnia’s Constitutional Court ruled on Friday that the Law on Medicines and Medical Devices and the amendments to the Law on the Administration in BiH’s Republika Srpska (RS) entity are unconstitutional.

The decision comes after the former Bosniak member of BiH’s Presidency, Sefik Dzaferovic, asked the court to review whether the laws are in line with the BiH Constitution.

Cvijanović argued that the Constitutional Court “with its decisions it persistently derogates from its highest legal and political act”.

“It is also tragic that those who normally lecture us on the rule of law will once again remain silent on the illegal existence of this estranged institution, just as they are silent on the sad fact that three foreign citizens are still sitting in it,” Cvijanovic told the Srna news agency.

Dodik meanwhile announced that the RS entity will continue to exercise its “constitutionally guaranteed rights” and establish a separate medicines agency.

The RS Law on Medicines and Medical Devices, which the RS Government adopted in February after it passed in the RS National Assembly, came into force on June 28. With this law, the RS began the process of establishing its own, separate Agency for medicinal products and medical devices.

It was part of a wider initiative by the Bosnian Serb member of BiH’s tripartite Presidency, Milorad Dodik.