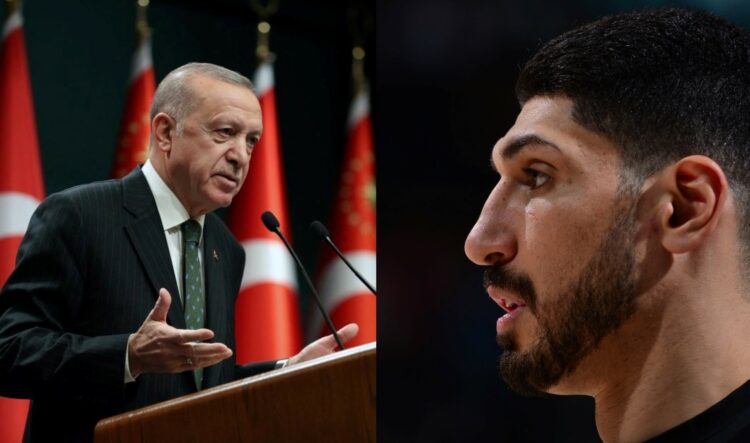 Former NBA star of Turkish origin, Enes Kanter Freedom, has recently come under the spotlight after he received death threats. Freedom is an outspoken critic of current President of Turkey Recep Tayyip Erdogan, which is why he was seized the passport and banned entry in that country. In an exclusive interview with N1, the basketball star who became US citizen in 2021, unveils details of his conflict with current Turkish government, how often he can see his family now that he is not allowed to travel to Turkey and what is his relationship with Fethullah Gulen, Turkish scholar and Erdogan's strong opponent.

You cannot reveal your location due to security reasons, and everything suggests that your safety has been jeopardized after the Turkish authorities named you a terrorist. You received some horrible threats after you criticized political ideology of Recep Tayyip Erdogan. The government offers a half a million dollar to anyone who provides any information about you. How do you feel? Is it hard to be in your shoes these days?

If you look at it, I am a basketball player and what I always try to represent is love, peace, freedom and democracy around the world. And that is making me a bad person. When you look at Turkey right now, unfortunately there is no democracy, there is no freedom, there are so many human rights violations and political prisoners but the thing is, you know, I have a platform given me by God so I have to use it to be the voice of all those innocent people out there who have no voice. Of course it is very hard to be in my shoes, but I am trying to always stay optimistic and trying to stay strong.

Why is Turkish president Erdogan disturbed by you? You call him ‘Hitler of our time’, that's quite a harsh criticism, but a democratic liberal world should allow criticism. Critics say this is not the case in Turkey under Erdogan's leadership. What is your mission, do you think you enjoy support in Turkey?

If you look at all my interviews that I have done in the past, if you look at everything that I write, even if you look at my tweets, my whole life I have never talked about politics. The only thing I was always focusing on: human rights violations and political prisoners in my country. That is making me a bad person and that is unacceptable. Turkey could have been a bridge between Islam and West, and just because of Erdogan's policies this is not possible.

I love my country, I love my people, I love my flag. My problem is with the current regime right now. I know that once Erdogan's regime is gone, Turkey is going to become more democratic and more peaceful once again.

We need to mention your relationship with Fethullah Gulen, his ideas that Erdogan's supporters consider ‘dangerous’. All those close to Gulen are subject of accusations. What is your role in Gulen's movement? Is that ‘terrorism label’ valid?

The first time I met Mr Gulen, it was back in 2013, and the first time I met him, the first thing he told me was: It doesn't matter what your background is, your skin colour, your religional culture, the most important thing in life is leave your differences on the table and try to find what we have in common. Because we only have one world to live in, we need to make this world better together. And that's the key word he told me – ‘together’.

And he believes that there are so many problems happening in our century and we have to beat those problems with education. So that's why this movement has schools, dormitories, universities and dialogue centres in over 170 countries in the world. This movement is focusing on raising generations. Because, if you want to have a better and brighter future we have to invest in our future and that's going to happen with our kids.

Gulen movement has schools even in Turkey and they are giving the best education. It is a crazy fact because even Erdogan's kids were going to Gulen movement's school, prep schools. They were given the best education. When Erdogan had corruption (accusations) back in 2013, Erdogan was pretty much shutting down all media outlets and putting every journalist in jail. So all other movements and groups and everyone was scared but Gulen movement. Gulen movement was the only group going out there, saying: ‘What you are doing is wrong, Erdogan. Stop stealing from people.’ So that's why Erdogan got so mad, he labelled Mr Gulen and his followers and said they are terrorists, unfortunately. But I think the one thing that the world needs to know is that Gulen movement is innocent and I know Mr Gulen himself, he doesn't even have a parking ticket in America. That's what people need to understand, this movement is focusing on peace, love, education and dialogue around the world.

You are not the only one that Turkish authorities want to prosecute for criticism. There is also the legendary football player Hakan Sukur, but you said there were many innocent journalists, academicians and activists on that list. Are their lives in peril as well?

I know Hakan Sukur, he's actually one of my best friends. He is on the list and also I want people to understand this, there are so many other people on that list, so many academics, professors, journalists, celebrities, athletes. Here is how it works in Turkey, if you are someone that criticice Erdogan regime, you are going to be in jail the next day. But if you are outside of Turkey, if you said anything against Erdogan regime, first they are going to put your family in jail and second, they are going to put your name on the Interpol list. They are going to try to deport you back to Turkey and they are going to put you on that most wanted list, and put a bounty on your head. And right now there are so many people who live in America on that list. Their lives are in danger. Whenever I had a conversation with FBI, and some of my friends, they said, you know this could trigger the serial killers, mafia, cartels, and professional hitmen, because we have a bounty on your head. I want people to wake up and say: ‘enough is enough!’ He is putting my life, he is putting my friends’ lives in danger.

For how long you haven't seen your family, Enes? Are they safe?

Last time I saw my family was almost ten years ago. Just because I talk about some of the problems happening in Turkey, they put my dad in jail. And he was gone in and out of Turkish jails and courts for seven long years. Right now there is no communication between me and my family, because my family knows as soon as I pick up my phone or call them, or text them, they are going to jail them the next day. My family had to publicly disown me, so Turkish government would leave them alone. Unfortunately, my family is getting harassed every day. My mum cannot even go out and walk freely in streets because someone always says a bad word to her. My dad cannot even go to a mosque, because they kicked him out of the mosque. And that is the house of God. My family had to move from where they lived to somewhere else, because they were harassed by their neighbours so much. Unfortunately, what Erdogan did was that he brainwashed Turkey, he brainwashed every Turkish citizen using the media. Unfortunately, there is no any kind of clear news in Turkey because if you are a journalist and if you say anything against Erdogan, you are going to be in jail the next day. So everybody is scared to say anything against him.

Turkish journalist Sedef Kabas was arrested after a public speech that was considered an insult to the honour of the Turkish president, and it is unpopular, you say, to express critical views on Twitter as well?

I am going to give you a very good example. I have a manager, he is from Bosnia. He has a Turkish wife. His wife's dad liked one of my tweets, he was in jail for 13 days. Just for liking one of my tweets. This sounds so crazy. People cannot even speak freely in Turkey anymore. If you re in a different party, if you say anything about Erodgan regime, if you tweet or if you put a Facebook post, if you say anything on Instagram, you are going to be in jail. The best example is Sedef Kabas, she's my friend. She posted something on her Twitter, the next day they took her to prison. I want people to understand what's going on in Turkey.