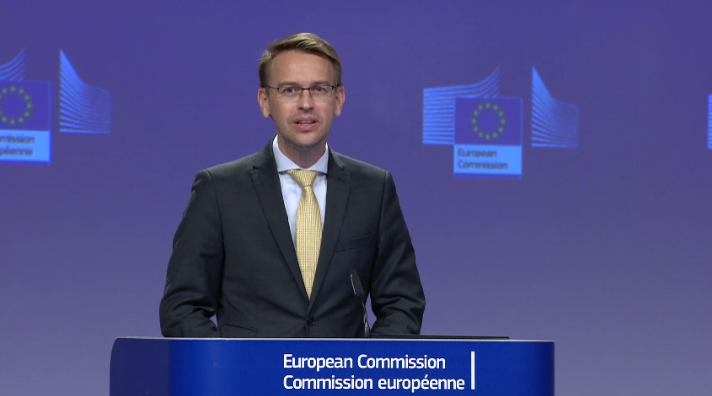 European Union firmly condemns negative divisive and inflammatory rhetoric used at the Sunday celebration by leaders of Republika Srpska, Bosnia's Serb-majority entity, European Commission spokesperson Peter Stano said on Tuesday commenting on the latest developments in Bosnia and Herzegovina. He stressed that such rhetoric and actions only heightens the tensions in the country and further escalating the political crisis. Stano also spoke about a possibility of the EU introducing sanctions on the Bosnian actors "from a wide toolbox" of the instruments it has at disposal.

The crisis needs to be solved and not prolonged or deepened, he stressed, recalling that the EU issued a statement a day ago and warned about the negative consequences of such actions and behaviours.

“And we were also very clear about our regret to have seen some partners supporting such actions and such a rhetoric and such behaviour, because this is threatening the regional stability and it's threatening the good neighborly relations in the region,” he stressed, adding that those partners know who they are.

Stano further said that it is not acceptable for the EU that the partners, including those in the acquisition process “in our immediate neighbourhood, in the Western Balkans continue with such behavior,” adding that this will reflect on their efforts to get closer to the EU.

Asked who their partners are, Stano clarified:

“This was about regional actors from the region, from the region, from the neighborly countries because their actions and their support shown to such a intolerable, unacceptable, divisive, and inflammatory rhetoric actions and behavior, as we have seen is really putting in danger the regional stability and has direct influence and can have negative impact on good neighborly relations. So based on these, those partners who are meant know very well, who they are.”

Speaking further on the situation in BiH, he said that the provocative actions and actions that are undermining the unity, territorial integrity and sovereignty of Bosnia and Herzegovina as a united state are going on for some time already.

This has been already discussed by the EU member states at the various forum. Most recently at the, at the subsequent discussions among the foreign ministers at the foreign first council. We have another meeting of the foreign ministers approaching in form of the informal meeting, that will go ahead in few days time. So I would not go into giving timelines, but I can just stress that these actions, these developments will be raised either there or at the regular foreign affairs council on the 24th of January,” he aid announcing new discussion on the situation in Bosnia and Herzegovina.

According to Stano, the EU member states are already following the situation, internally among themselves, and discussing how to approach it and “when is the right time to use all the tools we have at our disposal.”

“Until now the EU was conveying the message to all the partners and all the leaders in Bosnia and Herzegovina urging them, to engage, to renew the work or to restart the work of the state institutions and to end the crisis that you were involved in facilitating. And we keep being ready to facilitate the dialogue in order to solve the crisis. And when all these efforts will fail, then the member states will decide when is the right time to use the appropriate means. But let's leave up to the discussions among the foreign ministers,” he added.

Stano clarified that, concerning the potential sanctions and instruments to be taken, were referring only to those in Bosnia and Herzegovina, and not to the partners the EU expressed regret for their support.

“Let me also clarify one thing that the two things which we mentioned – review of the EU assistance and sanctions are just two instruments from the very wide toolbox that you can use in case the member states decided this is the way to proceed. So it's not that we have only these two instruments at our disposal. We have a wide variety of instruments and measures at our disposal to make sure that our policies or the EU standards are being followed and the rules and principles are being respected,” he further explained.

What the EU wants to achieve is the end of the political crisis, so that Bosnia can go on as a unified country and proceed on its path to the EU, and that the people can benefit from it.