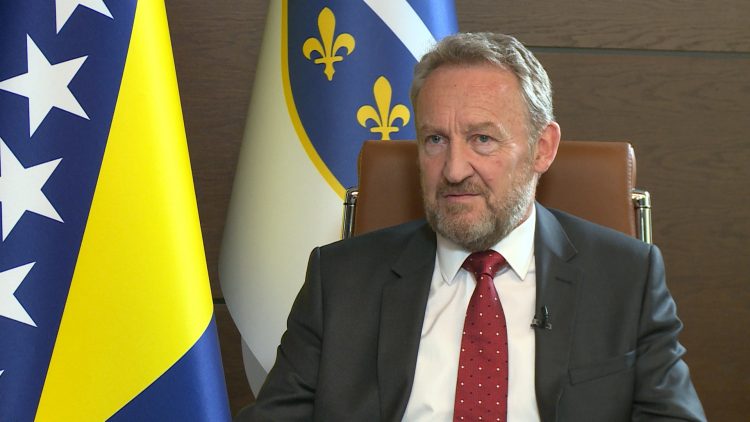 In an interview with N1, the leader of the strongest Bosniak party in BiH – the Democratic Action Party (SDA), Bakir Izetbegovic, said that artificial and overblown affairs, nationalism, blockades and crises are the things that bother him the most.

“These things go on, continuously for decades. I cand say I’m relaxed, but I’ve got used to them,” Izetbegovic told N1’s Boris Brezo.

Asked whether he would run for the Bosniak Presidency member, he said he would if health serves him.

“I suppose there’s a great chance that my people would propose that I run and if they decide to do so and if health serves me, I’ll run for office. Of course, one gets tired of all this but we can’t just leave things be. I have a feeling that I still must be present and give my contribution,” Izetbegovic said.

N1’s Brezo asked Izetbegovic to comment on the ever-present notion of the “Serbian world” which many believe is another name for Greater Serbia, to which Izetbegovic told an anecdote when a Serbian President complained to him about the situation in his country.

“A Serbian President told me some five-six years ago: ‘Bakir, as soon as the people around me are hungry, they want to fight. We’ve had a huge problem with Serb nationalism since the mid-19th century.’ He wasn’t talking about Serbs in general, but about a policy within the Serbian society which deceives the people, constantly leading them to conflict,” the SDA leader said.

Answering the question about the international community’s newly elected High Representative to BiH, Christian Schmidt, and the possibility of him imposing a new Election Law in BiH, Izetbegovic said he wishes the Office of the High Representative (OHR) would impose something transparent and with integrity.

“If politicians are not ready to give up the mechanisms to control the election process and fix the results, then the OHR should do it. That part would help us immensely by imposing [transparency] so that there is no doubt whether the elections were rigged or not. And if he imposes the Election Law in the part that specifically concerning the election of Croat representatives, I think that he shouldn’t do that as that would destroy his authority. Croats have their frustration and they are demanding a change in the Constitution so that there is no longer a Croat member of the BiH Presidency but a Croat-member who would practically be elected by Croats – which is something the creator of the Constitution did not want. Right now, you have Croats, Serbs and Bosniaks who represent the whole country and they should depend on the will of the voters from all three peoples. They do not represent only one of these peoples, however, if Croats insist on that and there is too much frustration that will destabilize the relations in BiH, it can be met by resolving the Sejdic-Finci verdict so as to abolish the prefixes that there is a Bosniak or Croats or Serb member of the Presidency,” Izetbegovic explained.

He further states that all constituent people have the right to be represented and to protect their vital national interest, but not prevent the formation of the new government in Bosnia’s Federation entity, which was the case in the last three years.

“I hope the international community would get more involved as we’ve now reached this level,” Izetbegovic said, noting that his party is ready to let Bosnian Croats what they want through the solution to the Serdic-Finci verdict.

Dervo Sejdic, a Roma and Jakob Finci, a Jew, have sued Bosnia because the Constitution does not allow them to run for president or member of the upper house of the parliament.

That is because according to the 1995 Dayton Peace Agreement, the country’s presidency consists of representatives of Bosnia’s three constituent peoples – the Bosniaks, the Serbs and the Croats. Its House of Peoples is also filled with members of only those groups.

That violates the rights of the country’s minorities and in 2009 the European Court of Human Rights in Strasbourg ordered the country to remove this discrimination from its constitution.

Since then, nothing has been done to implement the ruling, which not only concerns minorities but also members of constitutive peoples who live in areas of the country dominated by one of the other two constituent peoples.

Bosniaks and Croats living in the Serb-dominated part of the country, Republika Srpska (RS), cannot run for president or upper house lawmaker either and neither can Serbs from the Federation (FBiH), which is the other half of the country where mostly the other two constituent groups live.