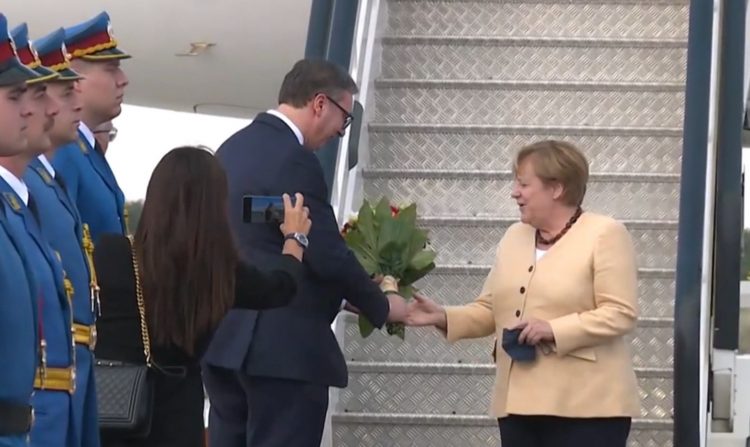 Angela Merkel, the outgoing German Chancellor, arrived in Serbia on Monday at the end of her 16-year mandate, and while Serbia's authorities are preparing a glamourous welcome, opposition says she brought President Aleksandar Vucic to power and suggested she should take him with her.

She will meet Vucic and civil society representatives from all six economies of the Western Balkans.

Merkel will travel to Tirana on Tuesday, where she will meet Albanian Prime Minister Edi Rama. Then, she will have a joint lunch with the heads of governments of the Western Balkans six. Later, she will have separate meetings with the prime ministers of Montenegro, BiH, Northern Macedonia and Kosovo.

„German Chancellor Angela Merkel brought Aleksandar Vucic to power in Serbia; she supported him all the time. Now that she is leaving politics, it would be fair to take him with her,“ Dragan Djilas said, the head of the opposition Party of Freedom and Justice (SSP).

A nationalist opposition leader added her „legacy in the Balkans is extremely negative.“

The head of the Liberation movement Mladjan Djordjevic said, „her legacy in this region are corrupted regimes, many linked to the mafia, drawing strength from German support.“

He said that Merkel’s support of Vucic started in 2011 and that then she „practically brought the Serbian Progressive Party (Vucic’s SNS) to power (in 2012).“

Addressing reporters outside Serbia’s Presidency building, Djilas agreed. He said Merkel was a historical figure, who marked the epoch in Germany and Europe, but among many things that would remain behind her were Hungarian Prime Minister Viktor Orban, Slovenian Janez Jansa and Vucic.

„If you ask me – mostly Vucic. With her support, he came to power; I can say that she brought him to power,“ Djilas said.

Both opposition leaders agreed that Merkel started supporting Vucic after the then President Boris Tadic refused to withdraw Serbia’s police from the north of Kosovo in 2011, claiming Vucic said – ‘I will do it.’

Tadic lost the presidential elections to Vucic in 2012.

Djordjevic added that „the Western Balkans states, including Serbia, are now further from the European Union than in 2005.“

He said that many German flags across Serbia on Monday showed „Vucic’s subservient attitude.“

Djordjevic described Merkel’s visit more as „the welcoming of a colonial manager,“ adding her coming did not mean a lot since she would soon retire and her party faced a defeat in the forthcoming elections.

However, Vucic had quite the opposite view of the Chancellor farewell visit. He said it was „a great honour for Serbia and an opportunity to express gratitude to her for everything she has done for Serbia and the region during her long and successful mandate.“