Sarajevo's new mayor: We must understand our citizens and work in their interest 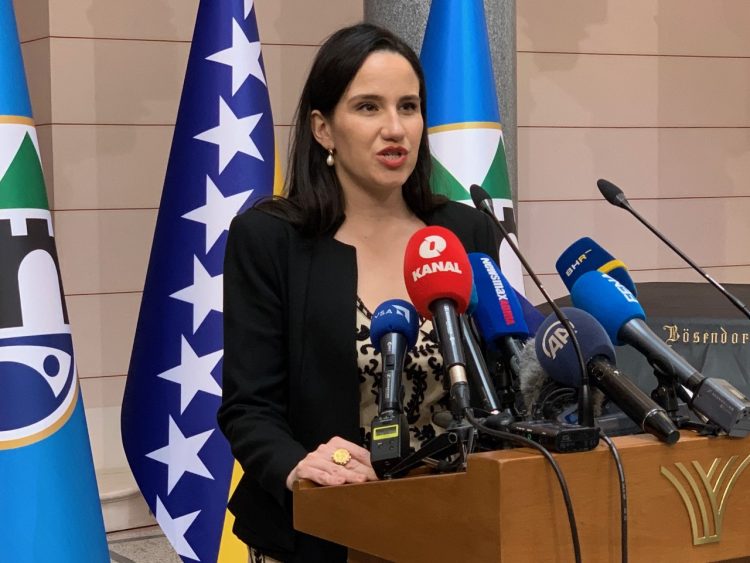 The anti-fascist, civilizational and freedom-loving spirit of Sarajevo is indestructible, Benjamina Karic said in her speech after she was sworn in as the new mayor on Thursday, calling on city councillors to cooperate with her in working for the interests of the citizens.

“I want us to be a great team that works exclusively in the interest of Sarajevo and BiH. We must serve Sarajevo and its citizens. Love for our Sarajevo should be the main motive for our actions,” she said.

Karic explained that this means “understanding the citizens, their problems and working for their benefit.”

She said that Sarajevo is known throughout the world and wants to “develop relations with all the cities that are friends of Sarajevo and develop new ones.”

“The spirit of Sarajevo is indestructible,” she said, describing the city as “anti-fascist, civilizational and freedom-loving.”

“Let us be proud of the history of the city, which has shown that even in the most difficult situations, it does not give up on the values of civilization. Our city is going through a difficult period again these months, the pandemic is taking human lives and leaving deep consequences. We all have to give our contribution in dealing with the consequences of the crisis, we have to show solidarity, responsibility and courage,” she said.

The City Council must be open to initiatives of citizens in regard to the development and better functioning of the system, she stressed.

Karic said she will strongly insist on the battle for equality for every person and called for unity, arguing that differences between people represent an asset rather than a handicap.

“I do not accept or support divisions. Our mission is to unite and create new values, to be remembered by the citizens for that. Sarajevo and Sarajevans are both traditional and modern. They recognized evil and resisted it both during the aggression and the longest siege of a capital city in Europe, as well as in the fight against fascism,” she said.

“I believe that the time of renaissance and prosperity of our city is coming, help me with that,” she added.

Karic said that she will focus on rationalizing the costs of the City Administration and adapting them to the current circumstances, contribute to the fight against all forms of crime, corruption and nepotism, establish quality relations with councillors, give priority to serious, honest and professional people who can improve the city administration and support scientists, athletes, businessmen as well as initiate projects and support existing ones.

Karic, born in 1991 in Sarajevo, is known to the public as the youngest doctor of law in Bosnia and Herzegovina and the first post-war doctor of classical Roman law.
She authored more than fifty publications, books, articles and translations from Latin.