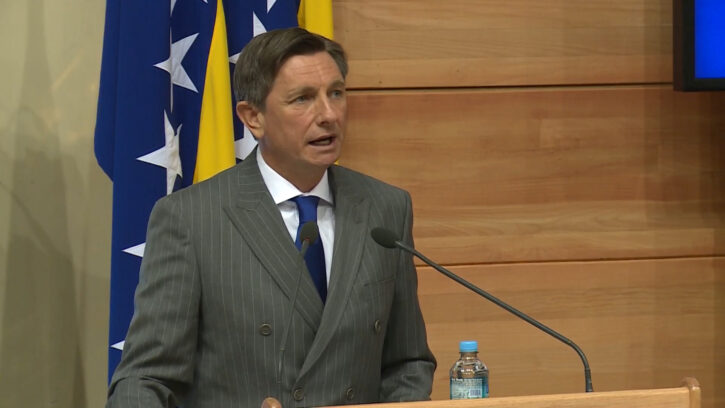 Slovenian President Borut Pahor said he resolutely supports the European Union's enlargement to the Western Balkans which he dubbed “the first-category geopolitical issue,” adding that he rejects any idea about the change of borders in the region.

Addressing a press conference regarding the allegations about a non-paper document on change of borders in the Western Balkans, Pahor said he was not aware of any non-paper during his latest visit to Bosnia and Herzegovina.

“I am a friend of this country, its territorial integrity and its Euro-Atlantic perspective. I am one of the rare country leaders who clearly emphasise the importance of reconciliation,” Pahor told Media in Ljubljana.

“I strongly object the ideas about the final fall of Yugoslavia and changing the current borders because I do not believe that would be possible in a peaceful way,” he added.

Pahor's press conference comes amid heated discussion on alleged unofficial documents that, according to some media outlets in the region among other things mention Bosnia and Herzegovina and potential changes of its borders. The media claimed that one of those non-paper documents, which outlines the plan for the future of the region, was recently sent to Brussels by Slovenian prime minister Janez Jansa, which he denied.

The country's president said any time he has a chance to speak about his stance on the Western Balkans and the EU's enlargement to this region, he tells the same.

“Fifth, accelerated EU's enlargement to the Western Balkans would also reduce the importance of naïve and dangerous ideas about the change of borders, which due to circumstances cannot happen in a peaceful way. I reject all those ideas about the change of borders. Sixth, accelerated process of including the Western Balkan countries would significantly strengthen the principle of territorial integrity of the countries, solving of their mutual issues and enhanced the stability of the region and Europe as a whole,” he added.