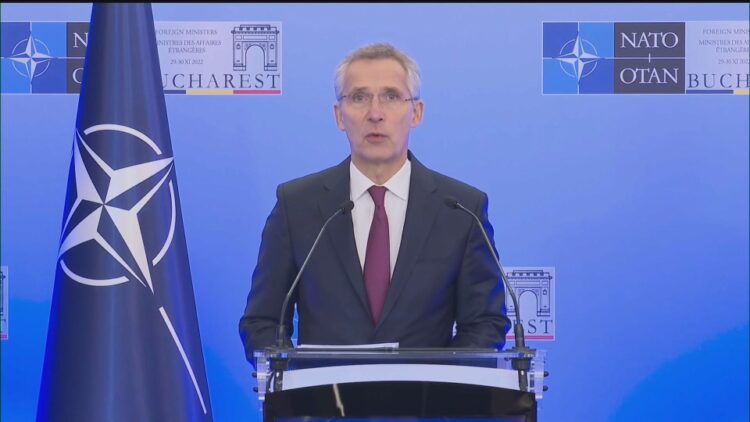 Among the three valued NATO partners exposed to the Russian pressure is Bosnia and Herzegovina, Jens Stoltenberg, the Alliance’s Secretary General said Wednesday in Bucharest, Romania where Nato ministers, joined by foreign ministers of Bosnia, Moldova and Georgia held a meeting.

Stoltenberg briefed the gathered media representatives on all points of the meeting, where they also discussed the Alliance’s relationship with China, the attitude towards Russian aggression against Ukraine, tailored aid to Bosnia, Georgia and Moldova, as well as the NATO membership of Sweden and Finland.

“These are three valued partners [Bosnia, Georgia and Moldova] are facing Russian pressure. We discussed common security concerns and ways to strengthen cooperation. Allies have agreed to increase our tailored support, including capacity building, reforms and training to improve defence and security institutions,” Stoltenberg said.

He also noted the importance of Bosnia and Herzegovina for the Alliance.

“It (Bosnia) is important for the stability of the entire Western Balkans, as well as for NATO, which has a history in that country and is still present in BiH. I just met with the Foreign Minister. In order to resist Russian influence, one of the most important things is to complete the formation of governments after the elections. Anything that can strengthen government institutions will make this country more resilient to malign activities. We are committed to further support BiH, among other things, through the construction of defence capacities via the NATO headquarters in Sarajevo,” Stoltenberg concluded.