US expands sanctions on Milorad Dodik

The US Department of the Treasury has expanded sanctions on Milorad Dodik, the Serb member of Bosnia and Herzegovina's tripartite Presidency, and introduced sanctions on the private media outlet Alternativna TV, based in Banja Luka, administrative seat of Republika Srpska entity.

The decision was confirmed on Wednesday on the official website of the Department of the Treasury. 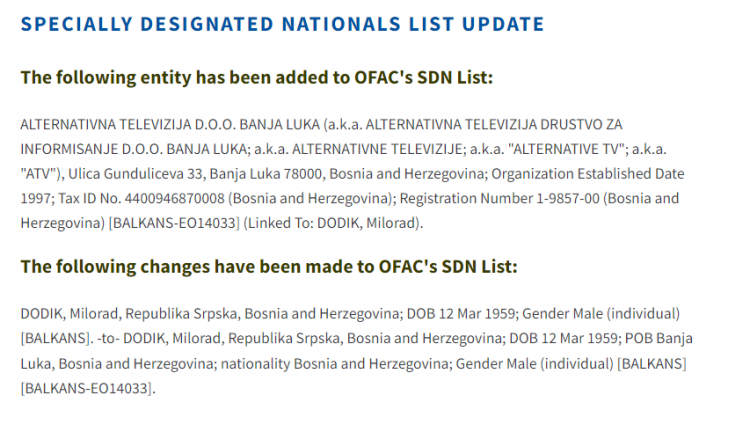 On June 8, 2021, President Biden signed Executive Order 14033 “Blocking Property and Suspending Entry Into the United States of Certain Persons Contributing to the Destabilizing Situation in the Western Balkans” (“EO 14033“), expanding the sanctions regime related to the Western Balkans. The White House also issued a fact sheet that details the US administration’s policy goals. US State Secretary Antony Blinken also issued a statement emphasizing the role that EO 14033 serves in modernizing the Western Balkans sanctions regime. Though the EO is mentioned on its Recent Actions page, as of the time of publication, the US Treasury Department’s Office of Foreign Assets Control has yet to designate a party under EO 14033.

“Today’s action, the first designations under E.O. 14033, builds on the Biden Administration’s commitment to promote accountability for those who, among other things, undermine the stability of the Western Balkans region through corruption and threats to long-standing peace agreements,” according to the statement issued on Wednesday.

It said that Dodik has undermined BiH institutions by “calling for the seizure of state competencies and setting in motion the creation of parallel institutions in BiH’s Republika Srpska (RS) entity.”

“Furthermore, Dodik has used his official BiH position to accumulate personal wealth through graft, bribery, and other forms of corruption. His divisive ethno-nationalistic rhetoric reflects his efforts to advance these political goals and distract attention from his corrupt activities. Cumulatively, these actions threaten the stability, sovereignty, and territorial integrity of BiH and undermine the Dayton Peace Accords, thereby risking wider regional instability,” the statement stressed.

As for the sanctioned media outlet, the OFEC said Alternativna TV is “privately owned by a company closely linked to Dodik's family” but that “Dodik himself  exerts personal control over ATV behind the scenes, such as by requiring personal approval on media stories related to politically sensitive topics.”

“He has funneled money directly from public companies to ATV for corrupt purposes. Dodik has substantially increased funding for ATV in recent years and engaged in malign social media influence campaigns through ATV to publish content that advances his political and personal goals,” the statement added.

The US had first introduced measures on Dodik in 2017, with OFEC placing the Bosnian Serb official on the Specially Designated Nationals list (SDN list).