‘ZAVNOBiH institutions were important for defence against aggression on Bosnia’ 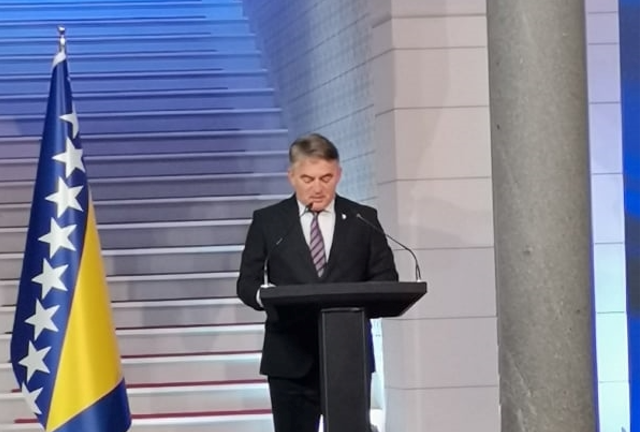 November 25, the day of the renewed statehood of Bosnia and Herzegovina, is the basic identity determinant of our state, Zeljko Komsic, the Chairman of the BiH Presidency said in his speech Thursday night in the Sarajevo City Hall on the occasion of Bosnia’s Statehood Day.

“This determinant has its different meanings, and these are, I would say, political, institutional and cultural meanings. Even though it existed hundreds of years ago in various forms, as a banate, kingdom, as a region under the jurisdiction of great empires, with its special role within those empires, BiH was first constituted as a state, ie as a Republic, on November 25, 1943,” Komsic said in his address.

Unlike previous arrangements, the notion of the Republic is the notion of modern civil society he said, meaning it carries the legacy of the great European revolutions. “November 25, 1943, is an expression of the maturity of Bosnian society as a whole,” Komsic added. “ By gathering experiences from its past, that society, meaning, its most progressive parts, were able to achieve strength, courage and intellectual capacity through the People's Liberation Movement.”

And indeed, that generation of people did become the creators of history, given the fact that they endured everything in their struggle for its democratic beliefs, which resulted in the constitution of the Republic, the Croat Presidency member said.

He recalled that the Republic was constituted on principles that have always been respected in a social sense, in a traditional way, on the principles of mutual respect between simultaneously similar yet different peoples.

“But then, for the first time, the peoples and citizens of BiH, respecting all the specifics and all the similarities, found a common language. This common language was contained in the simple formulation of the State Anti-fascist Council for the National Liberation of Bosnia and Herzegovina (ZAVNOBiH) that BiH is neither Muslim, nor Serb, nor Croat, but also Muslim and Serb and Croat and all other citizens living in it,” Komsic stressed.

He noted that the period between 1943 and 1992 should not be idealized, but it should also not be underestimated, because it is precisely the period in which the Republic institutions were built, which were again crucial in the defence against the aggression against the Republic of BiH.

Also, an important aspect of the ZAVNOBiH is the final definition of BiH as a multiethnic region, which in itself implies the participation of all members of different ethnic groups in government and social life, without ethnic discrimination that is present today, he said, and against which we all fight for a civic BiH.

“It was exactly the struggle led by the People's Liberation Movement. A struggle that rested on the values ​​of civilization, for which we still fight, today. These values ​​are under fierce attacks. Sometimes these attacks come from Europe itself and the EU, which is also based on the principles of anti-fascism. However, we will not give up this struggle for democratic and civilized values, regardless of how Europe treated them, because the generation of 1943 did not give up these values ​​even then in the conditions of Europe enslaved by fascism,” Komsic told the audience.

“We will not because our political, institutional, and cultural heritage is anti-fascism because our historical heritage is the democratic and anti-fascist Republic of Bosnia and Herzegovina. Even in the most difficult years, in the years of aggression against our state, we did not give up those values. Even today we will not give them up, because we believe in them, and we will continue to believe in them. The question of the survival of BiH is not just a question of the survival of the state. It is a question of the survival of civilization. For those of us who believe in BiH, this is not even a question, but a matter of dignity that no one can take away from us. And so let’s be proud of what we believe in! Let's be proud of Bosnia and Herzegovina,” BiH Presidency member Zeljko Komsic concluded, wishing everyone a happy Statehood Day.