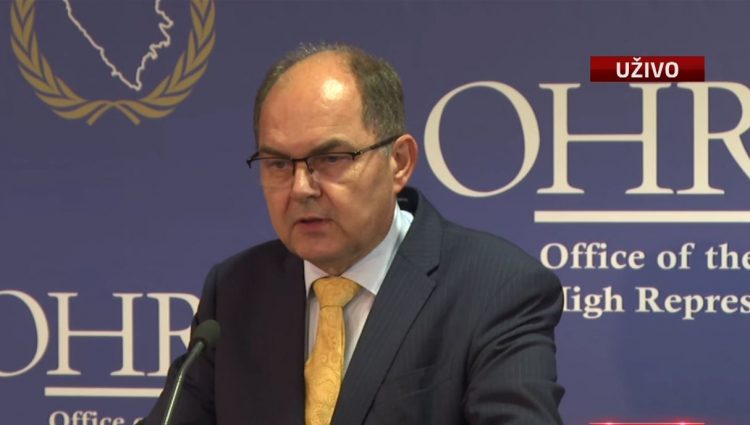 The High Representative in Bosnia and Herzegovina, Christian Schmidt, imposed on Wednesday a set of technical changes to the BiH Election Law concerning the integrity of the electoral process in the country.

Schmidt, who is tasked with overseeing the civilian implementation of the 1995 Dayton Peace Agreement in BiH, told reporters that there should be no first-class or second-class citizens in BiH, but also stressed that there are three constituent peoples living in the country.

Last week, N1 broke the story that, according to diplomatic sources, High Representative Christian Schmidt plans to use his ‘Bonn Powers’ to impose measures to secure the re-functioning of Bosnia’s Federation (FBiH) by August 1. The draft decision contains changes to the Election Law.

While Schmidt’s plan was welcomed by Bosnian Croat political parties, most notably the Croat Democratic Union (HDZ BiH), opponents argue the changes would lead to further systematic divisions in the country based on ethnicity.

The decision prompted thousands of Bosnians to protest in front of the Office of the High Representative.

The leaders of political parties in FBiH met with Schmidt on Wednesday before the international official announced the decision.

In his speech after imposing the decision, Schmidt explained that he passed “a package of transparency” after political parties failed to do so for a long time.

Although all parties said they agree to these measures, they never adopted them, he said, adding that this is why he took over the task to “respect the needs and wishes of the people.”
Schmidt strongly condemned the “warmongering rhetoric” of politicians during the election campaign, saying he will not allow it.

“The Dayton Agreement brought peace, there are still many obstacles on the way from Dayton to Brussels,” he said.

The High Representative said that BiH politicians face big challenges. One of them is to remove the blockades in institutions, he said.

Commenting on the mass protests, Schmidt welcomed “the peaceful assembly” of people and the public debates on these issues.

“Now it's up to the politicians to turn that debate into solutions. My advice to them is to do it, to take advantage of that opportunity, because they may not have another,” he stressed.

“I expect results, that they do something for the citizens and the country, I expect them to act immediately. This is not a friendly suggestion, it's their job,” he said.

He criticised Bosnia’s politicians for failing to adopt a Law on Public Procurement, which representatives of political parties agreed to do at an EU-facilitated meeting in Brussels in June.

“I appeal to everyone to work. I want their input and suggestions for removing blockades. The Constitutional Court of FBiH has no judges, the Government in FBiH has not been formed for four years, it is unacceptable,” he said.

He also stressed that it is important that BiH implements rulings by international courts.