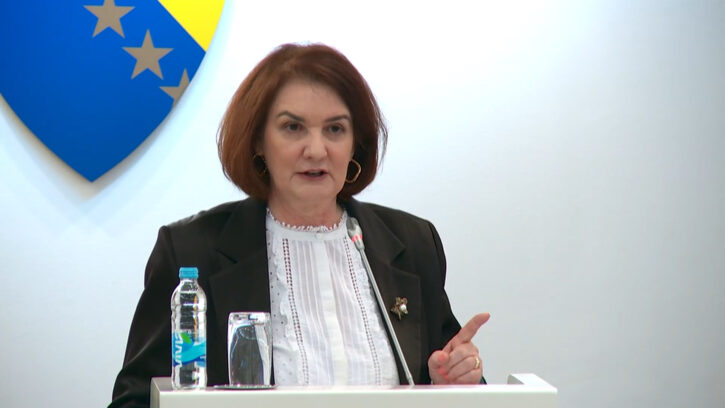 Bosnian Chief Prosecutor Gordana Tadic’s dismissal was confirmed by the second instance Disciplinary Commission of the High Judicial and Prosecutorial Council (HJPC) BiH after rejecting her complaints to the first decision, as unfounded, the HJPC said Thursday.

The HJPC recalled that, deciding on the disciplinary lawsuit of the Office of the Disciplinary Counsel (ODC) against Gordana Tadic, the first instance Disciplinary Commission established a disciplinary responsibility of the Chief Prosecutor ”because she failed to act per the relevant provisions of the automatic distribution system (TCMS) Rulebook and the Council Conclusion of 17th and 18th of December 2014, by which the HJPC BiH “instructs the Chief Prosecutors in BiH to ensure the assignment of cases in their institution to all prosecutors via the TCMS.”

They also stated that she “failed to take the necessary actions to remove possible technical obstacles to the allocation of cases by the automatic selection system,” thereby committing disciplinary offences of “negligence in the performance of official duties” and “failure to comply with decisions, orders or requests of the Council due to unjustified reasons” of the Law on the HJPC BiH.

During the period of her appeal to the decision, Tadic will continue to perform her duties as Chief Prosecutor.