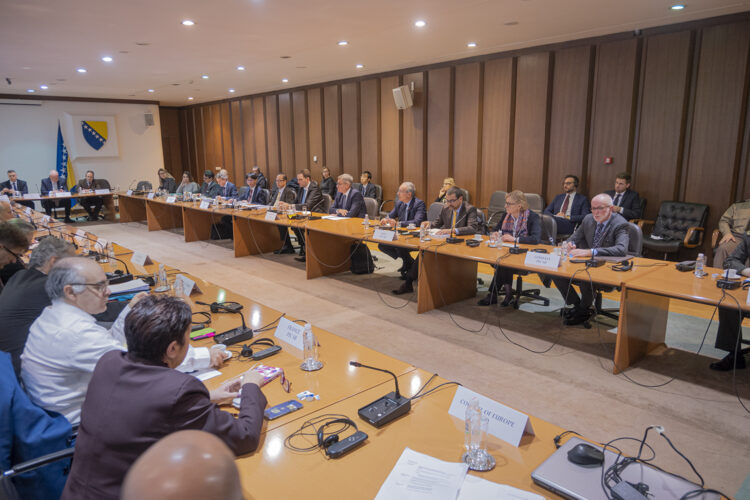 After its two-day session, the Steering Board of the Peace Implementation Council (PIC SB), the international body overseeing BiH’s peace process, called on authorities in the country to adopt a law regulating the issue of state property “without further delay”, among other things.

The PIC SB Political Directors met in Sarajevo on 8-9 December 2022 to discuss the October 2 General Elections and the subsequent process of forming the governments, as well as the rule of law and BiH’s Euro-Atlantic integration “in light of the serious challenges – and opportunities” the country is facing.

The PIC SB reminded all parties of their obligation to comply fully with the 1995 Dayton Peace Agreement, all its annexes, and the decisions of the official overseeing the civilian implementation of the Agreement, the High Representative. It also reaffirmed its “unequivocal commitment to the territorial integrity and fundamental structure of BiH as a single, sovereign state comprising two entities.”

The PIC SB also reiterated its “full support” for the High Representative in carrying out his mandate under Annex 10 and relevant UN Security Council Resolutions, which remains unchanged.

The Members of the PIC SB welcome the holding of general elections which were, according to the OSCE Election Observation Mission’s preliminary findings “overall competitive and well organized, but marked by mistrust in public institutions and ethnically divisive rhetoric”. However, the PIC SB noted that the elections were accompanied by allegations of serious election fraud, particularly, but not limited to, the presidential race in BiH’s Republika Srpska (RS) entity.

“The PIC SB calls on responsible authorities to swiftly and fully investigate allegations and punish those found guilty to the fullest extent of the law”, the international body said.

The PIC SB met with the newly appointed Chief Prosecutor of the BiH Prosecutor’s Office, the President of the Court of BiH, and the President of the country’s top judicial institution, the High Judicial and Prosecutorial Council (HJPC), and called for “effective, timely, and sustained action against organized crime and systemic political corruption”.

“The PIC SB regrets that nepotism and corruption remain fundamental stumbling blocks, causing massive damage to the economy, citizens’ daily lives, and the political climate. Action here would demonstrate commitment to the Rule of Law and transparency, key to the European path, and contribute to the safety and the well-being of all citizens of Bosnia and Herzegovina”, it said, adding that it “expressed unwavering support for authorities at all levels in tackling these critical challenges and called on the BiH authorities to urgently adopt the integrity amendments to the High Judicial and Prosecutorial Council law, the law on Courts, and the prevention of the Conflict of Interest law, fully aligned with European and international standards”.

The PIC SB also expressed regret that political parties “failed to reach agreement” on electoral reform, which led the international official overseeing the civilian implementation of the 1995 Dayton Peace Agreement, High Representative Christian Schmidt, to enact several amendments to the Election Law on 27 July and introduce sanctions for election fraud and strengthening the competencies of the Central Election Commission.

The PIC SB called on newly elected BiH authorities to undertake further legislative reforms, enhancing election transparency and integrity and ensuring adequate resources for the Central Election Commission. It also underlined that “local ownership of the reform process will ultimately be critical for Bosnia and Herzegovina to advance on its EU path”.

“On 2 October 2022, the High Representative enacted amendments to the constitution of the Federation and to the BiH election law, aimed at addressing several functionality issues and the timely formation of authorities”, it said, welcoming the “positive steps” taken by local political actors on institutional functionality to date, including the appointment of four judges to the Constitutional Court of the other semi-autonomous entity in the country, the Federation (FBiH).

“The PIC SB encourages all political actors to maintain this positive dynamic in establishing legislative and executive authorities at all levels of government in line with the law and agreeing on a comprehensive coalition program, which would address reforms and move the country forward on the EU path. Pending appointments in the government structure have to be addressed”.

The PIC SB called on the Fiscal Council and Council of Ministers to approve the Global Fiscal Framework for 2023-2025 to “pave the way” for passage of a state budget and also reminded all authorities of their obligation under the Dayton Peace Agreement to cooperate with the Office of the High Representative (OHR).

“The PIC SB condemns all secessionist rhetoric and action and calls upon the ruling coalition in Republika Srpska to cease all activities which violate the GFAP, including the BiH Constitution, or undermine State competencies or the sovereignty and territorial integrity of Bosnia and Herzegovina. The PIC SB underlines the obligation to implement the decisions of all courts”, the communique said.

The body expressed concern over “threats to freedom of expression, media, and association” in the country, and said it is “alarmed” by calls for legislation restricting those rights in Republika Srpska.

“The PIC SB reiterates these rights and professional and responsible journalism are essential to any democratic society”.

As for Schmidt’s efforts to launch a parliamentary process to resolve the issue of state property in accordance with BiH Constitutional Court rulings, the PIC SB called on the Parliamentary Assembly to “engage and adopt a law regulating the issue without further delay”. It noted that the resolution of state property is a key element of the 5+2 agenda, which remains necessary to complete before the closure of the OHR.

“The PIC SB calls upon all parties to promote an environment conducive to reconciliation. This requires accepting and acknowledging the facts, teaching the truth to future generations, honouring and remembering all victims regardless of their ethnicity, working to locate, recover and identify the missing, and investigating and prosecuting the suspects who remain at large. This is the only path to a future that heals and binds the wounds of BiH and guarantees a just and lasting peace for future generations”, the communique said.

The PIC SB welcomed the unanimous reauthorization to extend the EUFOR/ALTHEA mandate by the UN Security Council on November 2, noting that the mission is “vital in supporting local authorities in maintaining a safe and secure environment in Bosnia and Herzegovina.”

It also noted that, on 12 October, the European Commission recommended that BiH be granted candidate status by the European Council, provided that a number of steps are taken.

“The PIC SB calls on authorities to use the four-year mandates ahead of them to address the challenges and opportunities facing the country. The PIC SB calls upon domestic political actors to resume political negotiations and engage in public debate on essential reforms, including constitutional and electoral reforms to ensure the equality of all citizens and eliminate discrimination, particularly implementing the case law of the European Court of Human Rights in the Sejdic and Finci group of cases”, it said.